Update #3 (12:00 AM): The Daisuki Club on the official Japanese Pokemon website is now calling Reshiram and Zekrom the “Legendary Dragon Pokemon.” So it seems they will be part-Dragon type and most likely something else as well (Light and Darkness?). I also forgot that we now officially have 500 Pokemon! Yay! | Update #2 (12:30 PM): Clean artwork of the two Pokemon are now below. In case you only checked this story when we first posted it, you should reread it for new information and translations.

About an hour ago, the official Japanese Pokemon website and Pokemon.com simultaneously revealed the Legendary mascots of Pokemon Black and White: they are to be named Reshiram (レシラム) and Zekrom (ゼクロム) for both the English and Japanese games. Reshiram’s name comes from “shiro,” which means “white” in Japanese, whereas Zekrom’s comes from “kuro,” which means “black.” Contrary to their color schemes, Reshiram is Pokemon Black‘s mascot while Zekrom is White‘s, as you can see on the official Nintendo DS box art below. According to the Japanese website, “Reshiram, with a pure-white body, will be in Pocket Monsters Black, while Zekrom, with a lacquer-black body, will appear in Pocket Monsters White. Each of them are Legendary Pokemon that have a big connection to the history of the Isshu region and hold the important key to the story.” The games will hit store shelves in September for Japan whereas Americans will see their release sometime in Spring 2011. Click the first two images below to enlarge them.

Both Pokemon are such awesome-lookin’ legendaries – they kind of look like angels! Their designs are far more detailed than any previous Legendaries – check out those tails! They do have some slight familiarities though – Zekrom seems to have Palkia’s legs whereas Reshiram has a lighter version of Palkia’s whitish-pink color scheme. In terms of their names, they both end in either “ROM” or “RAM,” which are computer terms; it’s probably coincidental, though. In late June I will be going to Japan for over a month and plan to hunt down news on these games and on Pokemon in general as I did with HeartGold and SoulSilver and Arceus and the Jewel of Life last summer. We’ll see what happens, so stay tuned! 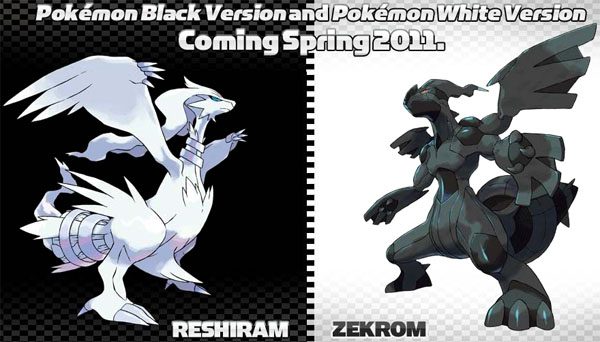 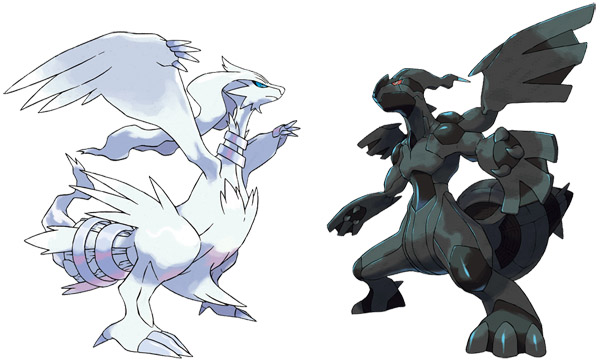