Update: This is why I can’t take real math classes in college. If you have four Slowking in play, you can flip up to four coins to cause your opponent’s Trainer card to fail, which means there is only a 6.25% chance their Trainer will work. Yes, the mistranslated Slowking was that powerful, and yes, I’m dumb when it comes to evil math. :D 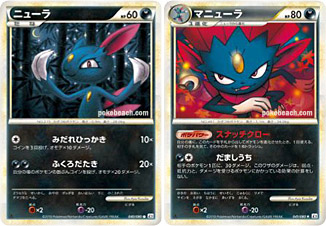 Sneasel from Neo Genesis is to be reprinted in Revived Legends with updated artwork and the same attacks. However, it will now have a new Fighting weakness and will only resist Psychic-type Pokemon by 20 damage instead of the original 30.

Back in ye olden days of the TCG, Sneasel was banned from the game due to its ability to deal up to 140 damage on the player’s second turn. Realistically it would deal less than that due to the coin flips required, but since the HP of Pokemon was much lower back then, Sneasel could still deliver serious and swift damage. Sneasel was banned along with the powerful Slowking at one point, though the latter was due to a mistranslated Pokemon Power that, at its worst, would only allow the opponent to use their Trainer cards 25% 6.25% of the time. In the current format, however, Sneasel won’t be as much of a threat due to its low 60 HP. Isn’t it interesting to see how much the TCG has changed since 2001?

There will also be a Weavile in the set, as you can see to the right. It has a Pokemon Power that allows you to view your opponent’s hand to discard a card, though the Power can only be used when you place Weavile from your hand on to Sneasel. Its attack allows you to snipe any of your opponent’s Pokemon for 30 damage.

Update (8:30 PM): New cards from the Tyranitar deck have been revealed! Bangiras has translated them all below. Bill is almost completely and utterly useless with Team Rocket’s Handiwork in the format.

[D] Bonfire Strike: 20 damage. If your opponent has any Fighting-type Pokemon in play, this attack does an additional 60 damage.
[D][D] Dark Roar: 50 damage. Your opponent discards 1 card from his or her hand.

Poke-Power: Snatch Claw
You can use this power once during your turn, when you play this card from your hand to Evolve a Pokemon. Look at your opponent’s hand and discard 1 card.

[D][C] Feint Attack: Does 30 damage to 1 of your opponent’s Pokemon. This damage isn’t affected by Weakness, Resistance or effects on the targeted Pokemon.

Draw 2 cards from your deck. Then, your opponent discards 1 card from his or her hand.

Show your opponent 3 Pokemon and 3 Basic Energy cards from your discard pile, return them to your deck, and shuffle your deck.