Update: In reviewing the episode, we’re not totally sure the Pokemon below is “Z” due to the fact it was implied rather than stated. If it’s not, it’s possible we could see two new Pokemon in a few weeks. Either way, we still have one new one!

Uploaded this literally ten seconds after it aired! Junichi Masuda’s video message showed a silhouette of the new fifth-generation Pokemon codenamed “Z,” as you can see below. It is the “Z” from the 13th movie’s title, The Ruler of Illusion: Z. Masuda also mentioned that this Pokemon holds the key to the movie. Pokemon Sunday will reveal the Pokemon in full on their February 21st show, which is in two weeks. CoroCoro magazine will be out before then and may reveal it first, though. How exciting is this?! Feel free to speculate what this Pokemon is in this forum topic! 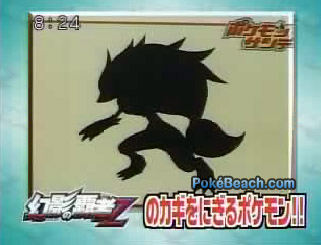