Now that everyone has had a chance to look through the four stories posted today, I can post this now! 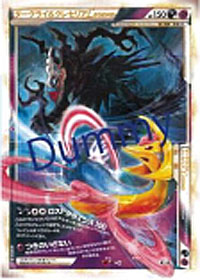 A special 40-card mini-set called Lost Link will be released in Japan on April 16th and will be themed after the Lost Zone. It is not Japan’s third LEGEND set – rather, it is a standalone, intermediary set. Each booster pack will contain one holo, seven cards (instead of the usual eleven), and will cost 200 yen (instead of the usual 315 yen). There will be no Energy cards in the set, meaning the 40 cards are completely comprised of Pokemon and Trainers.

Mew, Absol, Gengar, and Magnezone will be the four Pokemon Prime of the set and will each have attacks involving the Lost Zone. As pictured to the right, Darkrai & Cresselia LEGEND is also in the mini-set – the first of its two attacks is called “Lost Crisis” and does 100 damage to the Defending Pokemon, sending it to the Lost Zone if it is Knocked Out. As with the Legendary Pokemon of Revived Legends that are made from two different Pokemon, Darkrai & Cresselia LEGEND have the EX rule: if they are Knocked Out, your opponent takes two prizes.

We’re not sure why they created a set like this, but we’ll find out soon. When will America see these cards? TPCi could probably stuff some of them into our next HGSS set, but we can’t really speculate anything at this time. The information above has been posted on our new Lost Link page, including translations of the set’s advertisement courtesy of Bangiras. You can find the link in the future under “Japanese Set Translations” in the left menu. As a side note, the images are not “dummy” images – the online store that posted them seems to have stamped them incorrectly.