A “2009 Movie Premiere Pack” will be released on August 8th in Japan to commemorate the 12th movie, Arceus: Toward a Conquered Time and Space. Manga artists from CoroCoro and other Shougakukan magazines will illustrate the cards, which will feature Arceus, Notched-Ear Pichu, and other Pokemon that appear in the movie. All of the Pokemon will be Pokemon-SP. There are seven random cards in each pack, one of which is an Energy. Each pack will contain one holo and will cost 200 yen. Thanks go to Bangiras for translating the info! We’ll bring you more info when we hear it! 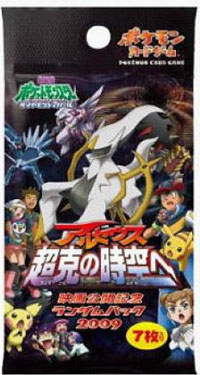