The fourth Japanese Platinum set will be named The Advent of Arceus. The name of the set in Japanese is “Arceus Kourin,” with “kourin” meaning “the coming of someone who is worshiped.” “Advent” means “an arrival that has been awaited (especially of something momentous).” The set goes on sale in Japan on July 8th.

A “Power Up Your Arceus Deck!” campaign will take place with the release of this set. If you buy two booster packs of the set from stores, you will receive an original promo card called “Ultimate Zone” as well as a comic book about the Arceus theme decks. The promo card is specifically made for the two theme decks and is apparently a necessity to have in them. Maybe it allows Arceus to change its type?

The solar eclipse that will take place in the movie is depicted on the booster pack. It looks like Croagunk, Luxio, Cherrim, Buneary, and their evolutionary families will be in the set. You can see images of the booster pack and two theme decks below. Thanks go to Bangiras for translating all of this information! 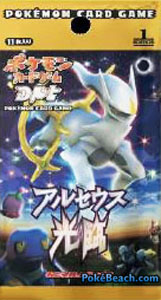 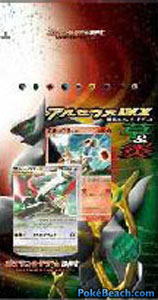 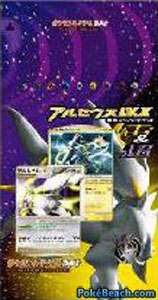