Sleep is for the weak!

Three “Pokemon Card Collection” packs will be released on April 18th in Japan, featuring Regigigas LV.X, Mewtwo LV.X, and Shaymin (Sky Forme) LV.X. The three cards use the promo tin artwork that was once exclusive to countries outside of Japan and not available on any Japanese card, but that will obviously no longer be the case.

Each pack will cost under $10.00 and will contain 12 cards, six of which are holo. The advertisement highlights it as a great product for collectors and players alike as it will feature cards from past Japanese TCG events, like Space-Time Distortion from Battle Roads and other Japanese events, the Toys R Us Cresselia, and the Player Club Promos Dialga and Palkia. We have received all of these cards in our sets and through our tins, but for Japanese players and collectors such cards are harder to come by as they are given out at various events and promotions that many people cannot attend.

We’re not sure about the remaining contents of the packs or if each pack will come with the same cards, but when we find out we’ll post the information here! These packs seem like an easier and more affordable way of getting those Space-Time Distortions some decks need nowadays and especially Shaymin LV.X for the various Grass decks running around. So, the Collection Packs will at least be of some use to English players. Thanks goes to Insayneflame for the heads up on this story! 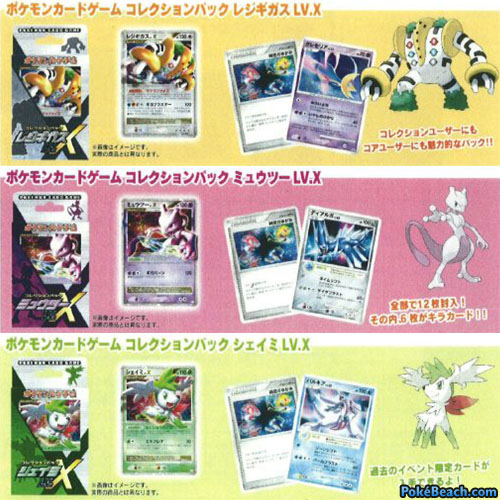