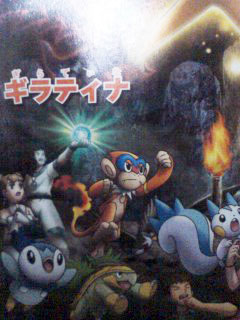 Teaser Poster of 12th Movie – A small teaser poster image has been floating around Japanese image boards, pictured to the right. It confirms that Ash will have Monferno and Staraptor by movie 12, as we said the other day (Staraptor is under Monferno’s arm and Pachirisu’s tail – it’s a bit hard to see). It also shows movie characters, with one holding a glowing object. The text in the poster says “Giratina” – the image is obviously only a portion of a larger poster. We’ll bring you more information when we get it.

All POP 9 Scans – We have low-quality POP 9 scans thanks to a couple of players who earned the cards early. Click the thumbnails below for larger scans. The set’s booster pack features Garchomp and older Japanese promos.

Most of the promos were released around the time of movie 10’s release in Japan (the June and July before last). The Garchomp line, as we reported a while ago, was released at Battle Roads in Japan around last September along with a shiny Milotic players could download to Diamond and Pearl. Manaphy and Rotom were given out at stores when the first Platinum set was released in Japan, along with Carnivine G, Darkrai G, and Probopass G (the latter cards are probably being saved for our next English set). It would seem that POP sets have become PUSA’s dumping ground for junky and outdated Japanese promos, though they do have to release them somehow I suppose. At least there is only one reprint this time (Gible).

Movie 12 Create-a-Card Contest – Pokemon Card Laboratory is holding a create-a-card contest in which winners’ cards will be featured in a card portfolio for movie 12, “Arceus: Space-Time Conquered.” Children will submit fan art and card text of 12 Pokemon from the movie. Arceus and Pichu are two of the cards; the rest will be revealed in March’s Shogakukan magazines like CoroCoro, Pokemon Fan, CoroCoro Ichiban, Terebi-Kun, etc. Applications to submit the card art and text are also in the magazines. The portfolio, like the 11th movie one from last year, will be sold during the month of July. 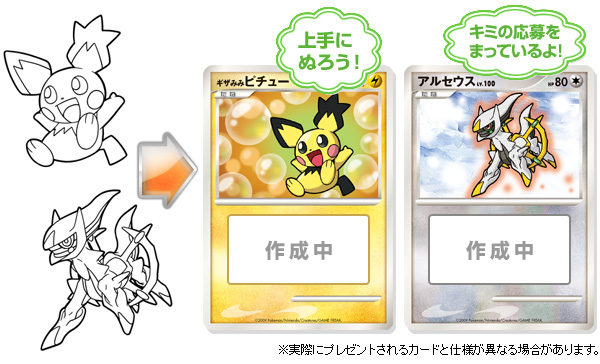