Would’ve posted this earlier, but I was getting all four of my wisdom teeth yanked. Blood tastes good. :D 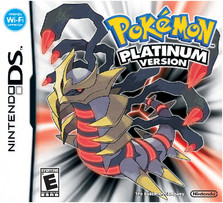 Pokemon.com has officially announced Pokemon Platinum, confirming the game’s release date as March 22nd and some renamed English names. You can read what they have to say below!

Another world has emerged in the Sinnoh region… a world where Time and Space are altered! (Oh noooo!) Coming to the DS on March 22, 2009 Pokemon Platinum introduces players to a new world to explore in the Sinnoh region: The Distortion World. With new adventures, never-before-seen Formes of powerful Pokemon, and expanded online options, Pokemon Platinum is packed with fun for Pokemon fans.