This January, three new “Classic Trio” tins will be released in stores like Target and Wal-Mart. Each will come with a holo Turtwig, Chimchar, or Piplup Diamond and Pearl promo, two EX-series booster packs, and one Diamond and Pearl series booster pack. A prototype image of the tins can be seen below, though like with all prototype images, the cards shown may not be what the actual products will contain.

The tins are probably branded “Classic” because they feature EX-series packs. Let’s just hope we get new artwork on those starter cards, and that it’s not also called “Classic” because it is re-releasing the same old holo Diamond and Pearl set cards. 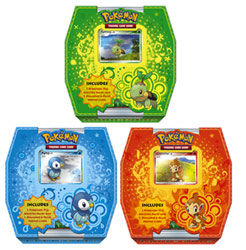