UPDATE #6: The blog “Wii @ Everyday” has photos of the new DSi in comparison to the DS Lite. You can check them out by clicking here.

UPDATE #5: More details. / UPDATE #4: Added many more details, thanks to Bangiras. / UPDATE #3: Added new information, fixed some mistakes. / UPDATE #2: Nintendo has opened two new pages: one that shows-off the Nintendo DSi’s features, and one that shows video of new games that will be coming out soon. No new Pokemon games have been announced. Bangiras is translating the websites to see if there is any more information. / UPDATE: Added picture of the white model.

A Nintendo of Japan press conference is taking place live as I am writing this news story, and the new Nintendo DS model was JUST revealed. Below are its new features: 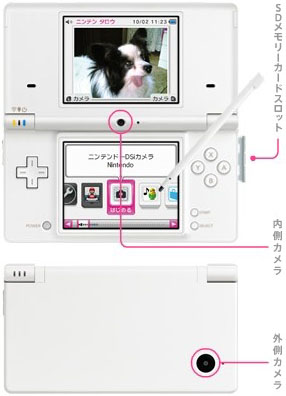