At Japanese Battle Road tournaments, players will be given a Gible, Gabite, and Garchomp promo, in addition to a shiny Milotic for their Pokemon Platinum games. Battle Roads are part of the process of getting to Worlds for Japanese players, and since Worlds will now feature a video game tournament, it seems Pokemon is now “promoting” the video games at Japanese tournaments like never before.

Bangiras has translated the cards and Milotic’s stats below. Note that Gible is exactly the same as its Mysterious Treasures counterpart, spare that it now has a promo stamp instead of a “DP2” stamp. 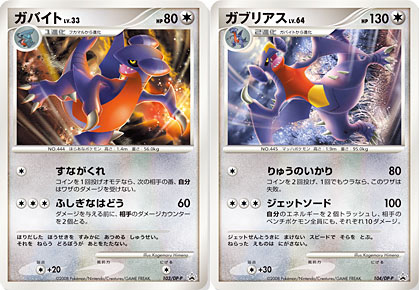 [C] Sand Veil: Flip a coin, if heads prevent all damage done to Gabite by attacks during your opponent’s next turn.
[C][C][C] Mysterious Pulse: 60 damage. Before doing damage, remove 2 damage counters from the Defending Pokemon.

[C] Dragon Rage: 80 damage. Flip 2 coins, if even one is tails this attack fails.
[C][C][C] Jet Sword: 100 damage. Discard 2 Energy attached to Garchomp and do 10 damage to each of your opponent’s Benched Pokemon.