This is a clarification / followup to our “New ‘Platinum’ Forms or 5th Generation Pokemon?” news story from two days ago. 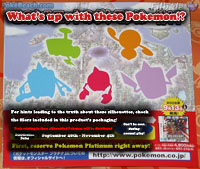 There seems to be confusion among some Pokemon websites and forums about the silhouetted Pokemon ad from the other day, so let’s straighten everything out word-by-word. Filb.de‘s webmaster, who is in Japan, went to a Toys R Us store, picked up the ad personally, and scanned it on to his website. Bangiras has translated the ad, and I have placed her translations over the original Japanese text so everyone can see exactly what the Japanese see. Click the thumbnail to the right for a larger view. This helps us to better understand the ad now that we can visually see it.

As for what is happening between September 28th and November 4th, let’s examine the yellow rectangle on the ad. The first and second lines in the yellow rectangle say, “Tools relating to these Pokemon will be distributed September 28th to November 4th,” while the small box to the left of the second line says “Distribution Dates.” Doesn’t that sound like actual “tools” or “items” will be distributed to people’s Pokemon Platinum games during those dates to help them unlock the Pokemon, especially since it specifically says “distribution dates?” Originally we thought Pokemon Centers would be distributing paper products giving clues about the Pokemon and how to unlock them during that time period, but it seems they are giving out actual items to people’s games. What helps to prove this even further is the blue oval within the section, stating “Can’t be seen during normal play!” “Normal play” implies whatever they are giving out is for the game itself, meaning this is an item distribution. It could also refer to the silhouetted Pokemon, but this is doubtful since it is obvious they cannot be seen in the game normally, and plus that blurb is within the section discussing the “tool” distribution. Also, how would you be able to see the new Pokemon in the game if there was no item to unlock them? So, an apparent item distribution is going to take place starting September 28th, revealing these silhouetted Pokemon within Platinum. But just who are these Pokemon?

While there will be fliers in Platinum‘s box with information about these Pokemon, we have to wait until then to learn about them. Here are three scenarios about the new Pokemon, which are all speculation, of course. Shaymin needs to be exposed to Glacidia’s Flower to change into Shaymin Sky Forme, so perhaps other Pokemon within the game will need special items to change into new forms as well. The items they need could be given out through this distribution, morphing some Pokemon, like Rotom, into new forms. The second scenario deals with the Reverse World. The silhouetted Pokemon look rather mechanical and odd, right? Perhaps they are Pokemon that reside in the Reverse World, and you need a sort of “Silph Scope” to see them. The “Silph Scope” is a tool to see ghost Pokemon, so maybe this distribution is giving out a “tool” to see the Reverse World Pokemon (if there are, in fact, such Pokemon). Of course, this scenario is less likely, since when capturing the Pokemon and using them in battle against players with Diamond and Pearl, the games would not be able to recognize the new Pokemon (unless they are forms of existing Pokemon, in which case the original forms of the Pokemon would be shown to the Diamond and Pearl players). The third scenario could be that these Pokemon are 5th generation Pokemon appearing in the game, but you can’t actually capture them or take them anywhere. This is similar to Pokemon XD: Gale of Darkness, where Bonsly appears in the game, but you can’t do anything with it since XD is a 3rd generation game and Bonsly is a 4th generation Pokemon.

Only time will give us more answers!