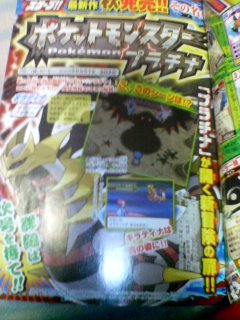 Pokemon Platinum has been revealed on an early scan of this week’s CoroCoro release, though as “Pokemon Platina,” which is closer to Giratina’s name (Giratina -> Platina). We can still call it Pokemon Platinum, though, since “Platina” is what the Japanese call “Platinum.” The Ken Sugimori art for Giratina’s Origin Form is also shown, confirming that the scan is real, and that Giratina’s Origin Form will be involved in the game somehow. Going by the dimensions of the scan, it was taken on someone’s cell phone camera, and is not fake.

In one of the game screenshots, Giratina is shown emerging in front of both Dialga and Palkia at Spear Pillar. Could all three be captured, like Kyogre and Groudon in Emerald? The in-game character sprite appears in front of Giratina and on the battle screen in a blue costume, indicating a new outfit design (such as Emerald characters having green clothing).

For the battle screen where the character is attempting to capture Giratina (in its normal form), its sprite is different from its Diamond and Pearl version, suggesting there might be new sprite designs in the game.

In both screenshots on the scan, Giratina is not shown in its Origin Form. How will one make it go into this form? For Deoxys in Diamond and Pearl, you have to expose it to different meteors. Perhaps something similar will occur with Giratina, like taking it somewhere or exposing it to something to induce its origin form.

No other information is revealed in the scan, but more scans will come out this week. When they do, we will have the information as soon as it is released (except if they come out on the weekend, since I am at my grandma’s house and have to get an internet connection in her driveway :p).