The best of both my animé worlds… Studio Ghibli and Pokemon. :D

The Ghibli Asemamire Broadcast is a weekly radio show that features key players from Studio Ghibli and guests they invite to the show. Studio Ghibli is the company responsible for movies like The Castle of Cagliostro (Lupin the III), Nausicaa of the Valley of Wind, Castle in the Sky: Laputa, My Neighbor Totoro, Grave of the Fireflies, Kiki’s Delivery Service, Whisper of the Heart, Princess Mononoke, Spirited Away, Howl’s Moving Castle, etc. In Japan, they are considered one of, if not the greatest, animation companies; their movies are extremely high-quality, both plot-wise and animation-wise. If you have never heard of them or seen one of their movies, you should go rent one or wait for Cartoon Network to have another marathon featuring a few of them. Their next movie, which is created by Hayao Miyazaki, is Ponyo on a Cliff by the Sea, and comes out in Japan on the same day as Giratina and the Bouquet from the Icy Sky, Shaymin.

GhibliWorld is a fan website that translates the radio broadcasts each week, and this week one of the guests was Kubo Masakazu, the executive producer of the Pokemon movies! There is quite an extensive dialog between he and Toshio Suzuki, the producer and president of Ghibli. You can read it below (for pictures and other information for this specific broadcast, visit GhibliWorld). 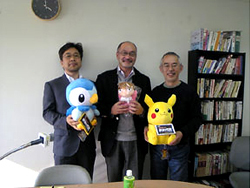 Suzuki, “Why did you set the releasing day on July 19th? That’s the day we release Ponyo!”.

Kubo, “NO! We set it long before you. Ponyo came later than Pokemon.”.

Suzuki, “Hey, Fujimaki. Are you backing Pokemon? You are standing behind Kubo!”

Fujimaki, “Hehehe… I’m backing The Sky Crawlers (note: Oshii Mamoru’s latest work, which is also to be released this summer).”

Suzuki, “When did we get to know each other?”

Kubo, “It was more than 20 years ago. I visited Miyazaki to ask him to make a sequel of Rupan Sansei: Kariosutoro no Shiro (Lupin III: The Castle of Cagliostro). He didn’t accept it though and told me about his next movie plan eagerly. It was so interesting.”

Kubo, “Yes. I liked Cagliostro so much.”

Suzuki, “By the way, is Pokemon’s character design being done by Kotabe (Kotabe Yaichi)?”

Kubo, “No, he is general animation supervisor. Ken Sugimori is designing the characters now. However, we did get a lot of influence from Kotabe.”

Suzuki, “Kotabe is a colleague of Takahata and Miyazaki from Toei Doga and they made Heidi or Marco together. I think Pokemon has some Ghibli flavor because of him. I guess Kotabe tells the staffs to imitate Ghibli.”

Kubo, “Of course. We must learn anything that’s good from every movie there exists.”

Fujimaki, “You don’t need to make a counterargument. It’s the same as Suzuki (laughing). By the way, I think Pokemon is such kind of movie: kids find out about it, spend some years and after that they leave. Instead of the common Ghibli pattern: people meet Ghibli and don’t leave.”

Suzuki, “Yes. We never let them go away.”

Kubo, “Yes. Pokemon is quite different from Ghibli. Doraemon is as well (note: Doraemon is another Shougakukan and Toho character). Kids come and go through.”

Suzuki, “Why do you make the same movie every year? We can’t do that. Aren’t you bored?”

Kubo, “No. It is interesting. The same characters, the same director. However, if you watch all of them, you can see it like a Space Odyssey in total. We won 1 time and lost 3 times to Ghibli in box office. Yamadas smashed to Pokemon 2nd.”

Suzuki, “Is that so?” Fujimaki, “Was that the one that got top of US box office?”

Fujimaki, “Aha. Ghibli has never got the top in US box office. They did get Academy awarded though.”

Suzuki, “I know Pokemon got slumping with their 3th, 4th and 5th film, but came alive again in the middle. It was great that you never gave up.”

Kubo, “Yes. We made a full-change of it to link the version up of the Nintendo game.”

I’m glad Kubo realizes Pokemon hit a slump during its movie history. Perhaps that is why The Rise of Darkrai saw a dramatic increase in animation quality? Of course, Pokemon could always use some advice from Studio Ghibli in terms of its movie plots and themes. ;)