UPDATE: Bangiras has just informed me that the original advertisement for these pogs actually just said “Pokemon A” and “Pokemon B.” I think it is safe to assume that the “Pokemon A and B” of the below advertisement have nothing to do with the “NEW Pokemon” A and B of the other advertisements, meaning that it is still likely 5th generation Pokemon will depute in movie 11. 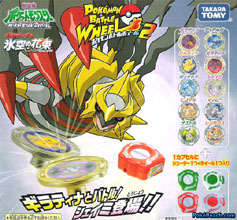 However, if it turns out that any mention of “New Pokemon” A and B refers to Shaymin and Giratina, all proof of the existence of 5th generation Pokemon will be shot down. This possibility does exist, and if it turns out to be the case, one cannot help but to think that the product advertisements advocating these “new” Pokemon were misleading. Why would the advertisements label the question marks as “New Pokemon” when they are not new? One could argue that the advertisements were referring to both Pokemon being “new” on those products, but even then, both Shaymin and Giratina have been shown on many other products, thus not even necessitating the term “new.” This fact alone may continue the idea that 5th generation Pokemon still exist. After all, in the April 11th news story, all of the stars of the 11th movie were shown on the poster, with “New Pokemon B” still being placed next to them (refer to the story for details). This also helps to support that “New Pokemon” A and B are only Shaymin and Giratina in the above advertisement, and not the others.