These daily updates take WAY too much time.

New Random Japanese Cards – The official Japanese Battle Road website today posted new promo and [DP5: Cry from the Mysterious, Temple of Anger] cards. You can view them all below. Riolu, Lucario, Luxio, Metang, Drifblim, and Magnezone are from DP5, whereas Dusknoir, Pikachu, Buck’s Training, and Cynthia’s Hope are promos, probably available through the Battle Road tournaments (Pikachu is a reprint from the [Entry Pack 2008 DX] decks with alternate art). We should have more information in the future regarding these cards. 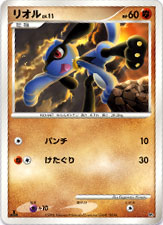 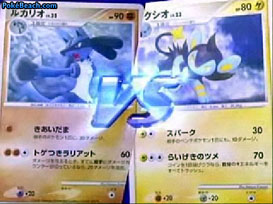 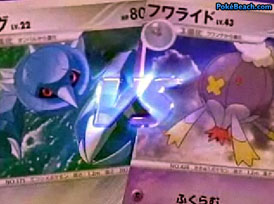 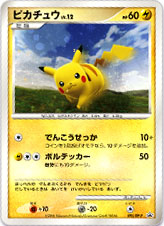 Bangiras was only able to read one of the images – Buck’s Training; its translation is below this paragraph. The card is definitely “different,” as it is a Supporter with a built-in Tool (in terms of what the card does). It seems that the Diamond and Pearl era is focusing on the Elite Four more, as evident by their greater roles in the video games, the animé, and the TCG. Perhaps Ash is going to actually face them at the end of D/P, since the TCG usually ties in to the show? That assumption might be going a little far, but the TCG is sometimes a good indicator of Pokemon that will appear in the show and movies, so it may apply to humans as well (not only that, but Cynthia and Lucian have both appeared in the show, and Cynthia will probably appear again – this and the cards are possibly foreshadowing greater involvement of the Elite Four later on).

Buck’s Training – Supporter
Draw 2 cards. If this card is in play when your Active Pokemon attacks, the attack does 20 more damage to the Defending Pokemon.