EDIT: Added a new news story below the original 11th movie trailer story because of the trailer being posted.

The TCG, video games, and animé – I think this is the only website that truly tries to bring all three aspects of Pokemon together in its news. :) Of course, we can still improve on what we cover in the future, and we will.

11th Movie Trailer Description – Thanks to the Japanese blog Pokemon Information Exchange, we now know what the next trailer for “Giratina and the Bouquet from the Icy Sky” will entail. Someone on the blog has seen the trailer before its official release, and their “summary” of it is below (the translation is thanks to Bangiras). The trailer should be released within the next few days on the official Pokemon movie website. We will post a notification here when it is up.

An “alternate universe,” a mysterious world where everything is different from this world, appears. Dialga, who has finished battling with Palkia, goes to this unknown world as if led by someone… a grand battle with the legendary Pokemon Giratina unfolds, who lives in the alternate universe. Then, an explorer-like man appears, followed by another man who seems to be the movie’s villain. The form of a sneezing Shaymin can also be seen.

Unless Regigigas is the Pokemon leading Dialga to the alternate dimension, it is not mentioned in the trailer at all (at least from the person’s description of it).

EDIT: 11th Movie Trailer Posted, Movie Information – The official Pokemon Movie website has just been updated to include more information about the 11th movie and now features a new movie trailer. Screenshots of the trailer are below, and information follows. 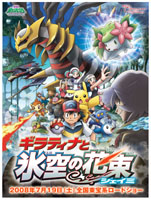 There are three new characters to be featured in the movie. The guy with the white hair is obviously the bad guy – his name is “Zero,” and he owns a robot with artificial intelligence (named Infi). The Pokemon he will use in the movie is a single Magnezone and many Magnemite. He also has a ship / base called the Megaliba. Zero wants to use Giratina to rule the world (so cliché – like he really is going to succeed). The “explorer” described in last night’s news story is named Mugen, who owns a Shieldon. He is a scholar exploring the Reverse World.

Because of the battle in the 10th movie between Dialga and Palkia, time and space have become distorted in the “Reverse World,” angering Giratina, and black clouds have started to pollute the beautiful place. The Reverse World is like a mirror to our own world, but many rules of physics apparently do not apply; Giratina is the ruler of it. As Dialga returns from its battle in Alamos Town, it is lured into the “Reverse World” by Giratina who is in its new interdimensional form, and a battle ensues.

Shaymin has telepathy, and discovers Ash and crew. It wants to guide them to a garden within the dimension for unknown reasons. Meanwhile, Regigigas has awoken from deep within a glacier, where it has been frozen for quite some time (whether it is in the Reverse World or our dimension is unknown).

Maybe the battle that took place in Movie 10 will finally be given a reason for occurring and continuing to Movie 11? Maybe this Zero guy is the cause.

It is vaguely mentioned that the Riolu and Manaphy missions (called “Aura Sphere Riolu Mission” and “Manaphy Egg Mission”) will be downloadable starting March 20th, the game’s release date. Japanese players will be able to go into stores’ DS download stations to receive the missions through Wi-Fi, but a list of stores is not available.

On March 21st, the official Japanese Pokemon website will begin to run a web comic based on the game. “Pokemon Ranger Battonage: the Comic” is being written by Satoshi Yamamoto and Hidenori Kusaka, who also write the popular “Pocket Monsters Special” comics.

A brief trailer for the game was also posted on Nintendo’s Japanese Touch DS website.

New Lucario and Magnezone Promos – A Lucario promo will be available at Pokemon Centers in Japan with the purchase of at least one DP5 booster pack. Another new promo, Magnezone, will be given to players who attend any Battle Road tournament (in Japan). Translations for both cards, thanks to Bangiras, are below. One can tell Magnezone will see a lot of play; only question is… when will we get it in America? POP 8? HA! Don’t count on it. ;) 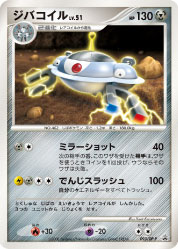 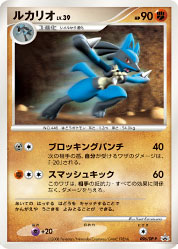 [M][C] Blocking Punch: 40 damage. During your opponent’s next turn, any damage done to Lucario by attacks is reduced by 20.
[F][C][C] Smash Kick: 60 damage. This attack’s damage isn’t affected by Resistance or any effects on the Defending Pokemon.

[M][C] Mirror Shot: 40 damage. During your opponent’s next turn, when the Defending Pokemon attacks, your opponent flips a coin. If tails, the attack fails.
[L][M][C][C] Thunder Slash: 100 damage. Discard all Lightning Energy attached to Magnezone.