Yesterday was the site’s 4th birthday (technically)! Even though I have been working on PokeBeach since 1999-2000ish, it opened to the public at a much later date in 2003, since I was learning all about HTML for several years and the site was never ready to be seen by anyone for a long period of time. Hopefully, Pokemon will last for many more years to come so that PokeBeach can last many more years to come as well! :D It has been a [long journey] (read the first news post on that page [at the bottom of the page], and you will see how I stuck to everything I said!).

Darkrai Player Club Promo – On June 25th, we posted six Japanese Player Club promo scans – Piplup, Turtwig, Chimchar, Manaphy, Dialga, and Palkia. Player Club promos are cards Japanese players win when they accumulate a certain amount of points from participating in TCG matches and winning games, and only the most dedicated players are able to win the high-ranking cards. Recently, the 10,000 point player club promo, Darkrai, was revealed, and you can view both its translation (thanks to Bangiras) and scan below. This card, as well as the ones posted previously, may come to America one day, especially since Espeon *, Umbreon *, Vaporeon *, Jolteon *, and Flareon *, who were featured in EX Power Keepers and POP 5, were released in American sets and were once Player Club promos in Japan. 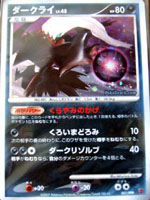 Darkrai Lv.48 – 80 HP [D]
Shadow of Darkness – You can use this Power once during your turn, when you play this card from your hand onto your Bench. One of your opponent’s Active Pokemon is now Asleep.

Diamond and Pearl Fall 2007 Tins – For around $16.00, you will be able to buy one of three new tins featuring Infernape, Empoleon, or Torterra at your local Target store (or wherever you go to buy cards). The tins will each come with two Diamond and Pearl booster packs and two Mysterious Treasures booster packs, along with one holographic card of one of the Pokemon mentioned above (which are reprinted cards from the Diamond and Pearl set). The three tins will each be available in stores starting in September, after the release of Mysterious Treasures. Click the thumbnail below for a larger image.