Okay, everyone come back! This site is going to be more active again, now that high school is over. Our graduation was yesterday, followed by Disneyland from 12:00 until 6:00 AM for Grad Nite. It was a great time, and I will miss my school! Next year is college! Now, for the first time in probably seven years, I have a 100% free summer, which means more time for PokeBeach!

Mysterious Treasures – Mystery of the Lakes, the second Diamond and Pearl Japanese set, will now be named Mysterious Treasures for its American release. We are finally getting standalone names for our sets, like with old sets – no more “EX: This!” You can view a set description below, provided by Pokemon USA. To view the Japanese spoilers for this set, translated by Bangiras, [click here], and for Japanese scans of the set, [click here] (you can access these links in the future from the right menu, under “Hot Links”).

Shining Darkness Update – The official Japanese TCG website has updated with new Shining Darkness updates! First off, celebrating the July release of Shining Darkness, the third Diamond and Pearl set, featuring Darkrai, new wallpaper of the set is now available! Select your screen resolution from the wallpaper thumbnail below if you want to make the image your desktop background, and save the image to your computer. The booster pack images and packaging of the theme decks have also been revealed, as well as a new Darkrai card from the set, which can all be seen below. Most exciting, new images of several Pokemon that are in the Dialga and Palkia theme decks and the main set were also posted on the website, including Ampharos, Gallade, Raikou, Arcanine, and others, and can be seen by clicking here. Translations of these cards, written by Nanimonoka, are below for your viewing pleasure. 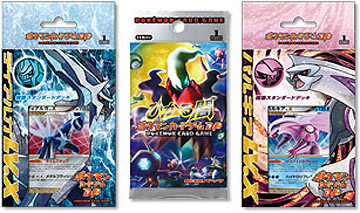 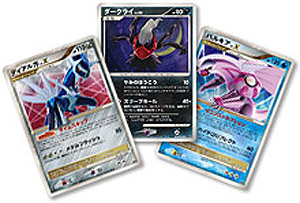 Dialga LV.X – 110 HP [M]
Level Up – Dialga
Poké-Power: Time Skip: Once during your turn (before your attack), you can use the Poke-Power. Your opponent flips 2 coins. If they are all heads, your turn ends. If they are all tails, your opponent’s next turn ends after he draws a card. This power can’t be used if Dialga is affected by a Special Condition.
[2MM] Metal Flash (80) During your next turn, Dialga can’t use Metal Flash.
Weakness: Fire x2
Resistance: Psychic -20
Retreat Cost: 2

Gallade L55 – 130 HP [F]
Stage 2 – Kirlia
[1F] Sonic Blade () Put damage counters on the Defending Pokémon until it is 50HP away from being Knocked Out. Then, switch the Defending Pokémon with 1 of your opponent’s Benched Pokémon.
[2P] Psycho Cutter (60+) You may choose any number of your Prize cards, and put them face up. This attack does 60 damage plus 20 more damage times the number of the Prize cards you put them face up just now.
Weakness: Psychic +30
Retreat Cost: 2

Raikou L42 – 80 HP [L]
Basic Pokémon
Poké-Power: Intense Lightning(?): Whenever you attach a [L] Energy card from your hand to Raikou, you may put 1 damage counter on 1 of your opponent’s Benched Pokémon. This power can’t be used if Raikou is affected by a Special Condition.
[LLL] Thunder Climb (50+) You may look at the top 3 cards of your deck. This attack does 50 damage plus 10 damage times the number of [L] Energy cards in the 3 cards there are. And attach the [L] Energy to one of your Pokemon. This card the other cards.
Weakness: Fighting +20
Resistance: Metal -20
Retreat Cost: 2

Arcanine L48 – 100 HP [R]
Stage 1 – Growlithe
Poké-Power: Flame Dash: Once during your turn, when you play Arcanine from your hand to evolve 1 of your Benched Pokémon, you may switch your Active Pokémon with Arcanine. If you do, you may move any number of Energy cards from that Pokémon to Arcanine.
[2RR] Flame Dash(120) Arcanine does 40 damage to itself.
Weakness: Water +30
Retreat Cost: 2

Rowan’s Research
Supporter
You can play only one Supporter card each turn. When you play this card, put it next to your Active Pokémon. When your turn ends, discard this card.

Search your deck for up to 2 in any combination of Basic Pokémon and Basic energy cards, show them to your opponent, and put them into your hand. Shuffle your deck afterward.

Japanese 10th Anniversary Collection – Starting July 14th in Japan, a small portfolio containing 11 cards of Pokemon featured from the past nine movies will be sold, each for 1,000 yen. The Pokemon that will be available within the portfolio are Mewtwo, Lugia, Entei, Celebi, Latias, Latios, Jirachi, Deoxys, Mew, Lucario and Manaphy, with an empty space for Darkrai, all on Diamond and Pearl card templates. Click the picture to the right for a larger image, and if the text is large enough for one of our translators, we may have translations later. Darkrai is not present in the collection – it will be given out in theaters to fill in the empty slot, and you can view the actual card below (it has a built-in item!). 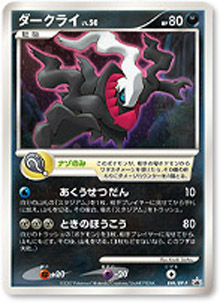