The right menu’s dates have been updated to be completely accurate now. I have also changed the menu header images. :D

Diamond and Pearl Wi-Fi League – PokeBeach now has a Diamond and Pearl Wi-Fi League, and we are probably one of the first Pokemon websites to start one! If you have Diamond and Pearl, or are going to get Diamond and Pearl in eleven days, you should definitely check this out. With our Wi-Fi league, you can organize battles with other players, participate in tournaments on PokeBeach (after D/P come out), battle PokeBeach Gym Leaders (which will be picked after D/P come out), and trade Pokemon and items from D/P through our forum. The advantage with participating in a Wi-Fi league is that you can find people through the forum to battle instantly, specify how you want to battle, search through players’ “My Player” threads to look for Pokemon you want to trade for, put up your own Pokemon for trade in your own thread, and specify the stats of the Pokemon you are looking for (such as nature, level, attacks, etc). To read more about the PokeBeach D/P Wi-Fi league, even if you do not have Diamond and Pearl yet (which most of us do not), you can read this thread on our forums, and begin from there (if you need to register on our forums as a member, which you need to do to make your own “My Player” thread, click here; it takes less than 30 seconds to register). If you do not have Diamond and Pearl, you can still get a head start on this and make your “My Player” thread, since most of us have Pokemon from previous Gameboy games that we will eventually trade over to Diamond and Pearl and make available for trade, and since many of us know what Pokemon we will want when D/P come out (such as Palkia if you only get Pokemon Diamond). Then when you get D/P, you will know where to go when you want to make a trade with someone or when you need to battle someone. Did I forget to mention that winning battles and tournaments in this Wi-Fi league earns you points toward goodies in the future? So check it out!

UPDATE: Due to people asking for a Wi-Fi League for other games, such as Mario Kart DS and Diddy Kong DS, we have also made a forum where people can organize races with each other (or whatever, depending on the game). To read more about this forum and how it works, click here. 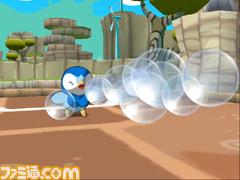 Pokemon Battrio – Famitsu.com has revealed a new Pokemon arcade game that will be released in Japan soon (and probably nowhere else). The game features cell-shaded Pokemon in 3D, similar to Battle Revolution, but one can battle Pokemon 3-on-3, hence Battrio. Apparently, players interact with pogs on a real battlefield, and the battle plays out on a television screen, although details on how this actually works are vague. This game will be an arcade game only, so it is unknown if the game will ever leave Japan or move to another system, such as the Wii. To view pictures of the arcade game, you can view Famitsu’s Pokemon Battrio page by clicking here.

More “Prettiful” Scans – Shakespeare has now scanned in new, enhanced, high-quality scans for [EX Crystal Guardians]. Currently, we are only missing about a dozen scans of any English Pokemon card EVER, so if you have any of the scans listed in this post and a high-quality scanner, please respond to the thread with what you can send in. Thank you!