Anyone interested in me creating a section on PokeBeach for the background / classical music of Pokemon?

EDIT:Mystery of the Lakes Decks / Boosters – The Mystery of the Lakes, the next Japanese set featuring the Sinnoh trio of Yuxie, Emurit, and Agnome, has had its booster pack and theme decks revealed. You can view the pictures below. Remember, the set will be released March 2nd in Japan, and we will most likely reveal everything about the set to you like we always do. More info later! 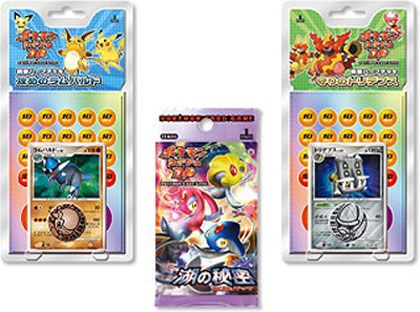 POP 5 News – Exclusive news on POP 5 at 12:30 in the morning! POP 5 will be released March 11th and will contain 17 promo cards. You can view the mostly complete list below. In Japan, a Player Club Program exists where you can earn both Espeon * and Umbreon *, but only if you accumulate 40,000 points (for Espeon) and 70,000 points (for Umbreon). To put the rarity of the cards into perspective, you earn only 100 points for participating in TCG tournaments in Japan. Umbreon * is undoubtedly one of the rarest Japanese promos in existence (less than 10, maybe even 5, of the cards even exist), but since the cards in POP 5 are non-holo, the Japanese holo version of the cards will most likely not diminish in value. Click the thumbnail of the two cards for a larger image.

Lucario a Finalist! – As we covered in a previous news story, Lucario and the Mystery of Mew was selected as an option for the American Anime Awards’ “Best Anime Feature” category. The results are in, and it has been nominated as one of the five finalists in the group! To read more about the American Anime Awards, taking place at Comic-con in New York, click here. The ultimate winner of the category will be announced February 24th. And people say Pokemon is dead…