Expect a Modified Card-Dex update within the next week or so. DocRobot is helping me with it, since I (temporarily) do not have the time to work on site projects. My time is gone with the wind.

Updated Apprentice Patch – For those of you who use Apprentice to play the Pokemon TCG on the internet, you can find an updated EX Power Keepers patch on our Apprentice page. If you would like to download the program for the first time, check out Apprentice and its uses by reading about it in the above link. Thanks go to SpyRevenge for updating the patch to EX Power Keepers!

2007 Spring TCG Tins – In March, three new tins will be available at local stores, such as Target, retailing for around $20. Each will contain four booster packs, including two of EX Power Keepers, one of EX Delta Species, and one of EX Dragon Frontiers. The tins will also come with 1 of 3 Pokemon TCG: Diamond & Pearl preview cards (and that is the official sentence used from the press release, so the set name could be either TCG: Diamond and Pearl or just Diamond and Pearl, if that’s what the press release is hinting at). Click the picture on the right for a larger image of the tins, featuring Milotic, Camerupt, and Tyranitar.

American Manaphy DVD Cover – The DVD artwork for Pokemon Ranger and the Temple of the Sea, which will be released on April 3rd for around $20, can be seen below. The artwork is almost exactly the same as the Japanese cover, which I have placed next to the American artwork for comparison, spare some cropping, slight moving of a few elements, and the obvious logo change. The DVD will unfortunately only come in a cropped full screen edition (1.33:1), cutting off a major portion of the movie’s original picture. Hopefully in the future, a widescreen edition of Pokemon movies will make themselves available (come on Viz… you know you can do it… this isn’t the 1990s anymore where people mistakenly think widescreen is horrible and fullscreen is what DVDs should come in… at least I hope so… :p). 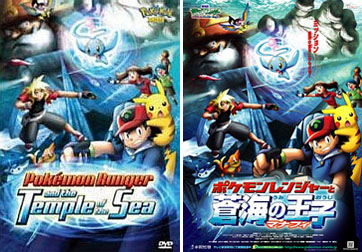 Random Videos – I was bored today during math class, so I went on to YouTube with my laptop and randomly found two cool videos. The first one features a battle between legendaries and some magician guy on Pokemon Battle Revolution (new Pokemon include Darkrai and Dialga, with older shiny legendaries), and the second one is the ending of the Manaphy movie, but without the Japanese credits covering everything. Click play on whichever one you want to view.