Wow, three updates in a row. I haven’t been this free in a while, have I? Let’s see how long this lasts. :p 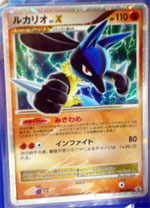 Lucario Lv.X – The most common Level X card, yet one that has not been seen on the internet yet, has now been revealed! Lucario Lv.X is now available in Japan as a promo card in the “Pokemon Card Game DP Official Visual Book,” which can be seen by clicking here. Since the book is available for purchase by anyone in Japan, Lucario Lv.X is an extremely common card, and is by no means as rare as the other Lv.X cards in [Pokemon Card Game: DP]. You can view the translation of Lucario Lv.X below, thanks to Nanimonoka, as well as an image of Lucario Lv.X to the right, thanks to Tego (click for a larger image).

Lucario Lv.X – Fighting – 110 HP
Poke-Power: Ascertain
Once during your turn, when you play Lucario Lv.X from your hand to Level Up one of your Pokemon, you may use this Power. Prevent all effects of an attack (including damage) done to Lucario during your opponent’s next turn.

[F][F][C] Infighting: 80 damage. During your opponent’s next turn, any damage done to Lucario is increased by 30.

Pokemon TV Schedule this Week – This week, as with the past few weeks, Pokemon will depute new Battle Frontier episodes Monday through Thursday at 8:00 PM on Cartoon Network. Saturday at 7:00 AM and at 5:00 PM and 5:30 PM on Sunday, repeat Battle Frontier episodes will also air, so if you missed any, those are the times to catch them! Pokemon Advanced Battle episodes also air at 7:00 AM and 5:00 PM every Monday through Thursday. The exciting aspect to Pokemon USA speeding through the Battle Frontier episodes is that on Monday, December 18th, the episode featuring Perap should air if they keep the same pace, and we may learn Perap’s English name (I have a slight feeling it will stay the same, but that’s just me). Perhaps I will get some episodes up eventually, but since my time has been extremely limited lately, I cannot guarantee or promise it anymore.