Advanced Generation / Ruby and Sapphire is coming to a close now, incase you didn’t notice. We are going to be heading to Shinou / Shino / Shinoh (however you romanize it) now.

Trading Figure Game Pictures – Thanks to Oddish196, we now have a poster depicting each of the figurines you can buy for the Pokemon Trading Figure Game. Currently, the game has not been released in America, but it should be making its way here early next year. Click the thumbnail for a larger image. 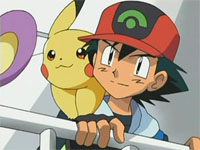 Last Episode of AG Aired in Japan (spoilers) – The last episode of Advanced Generation aired in Japan today, concluding the four-year series. In the episode, May and Max decide to go to Johto to compete in Pokemon Contests, while Brock decides to go back to Pewter City. While Ash is trying to go back to Pallet Town, Team Rocket tries to steal an Elikible (Electabuzz evo), but Gary pops out of nowhere and orders it to rock’em-shock’em (which means he owns it). Ash then heads back home where there is a surprise party waiting for him, with Oak, Tracey, Mr. Mime, and Gary being there. Afterwards, Gary and Ash have a battle, with Gary sending out his Elekible and Ash using his old rat. Pikachu loses. Gary then decides to head off to Shinou, and Ash watches him leave (he’ll always be better than you, buddy). It seems as if Ash wants to go to Shinou now too, and Delia seems extremely saddened that her little 10-year-old boy (who should be like 20 now) is leaving her again. At night, she works at her desk compiling what seem to be Ash’s new clothes for Shinou that he was shown wearing in that image we posted the other day. The next day, as Ash leaves for Shinou (with Oak giving him a new PokeDex), Aipom looks sad, but Ash leaves him and everyone else anyways. When he gets on the boat for Shinou, his hat flies off (note that at this point he does not have his new clothes yet), and he discovers that Aipom has snuck aboard (now why would Ash have caught Aipom so late in AG and it come with him to Shinou if it wasn’t going to evolve?). Team Rocket is also seen in the water holding on to the ship, which means they are going to Shinou too! And thus, Ash, Pikachu, Aipom, Team Rocket, and Gary (who is not seen, but went) head off to Shinou.

Diamond and Pearl Cast (spoilers) – But after Brock leaves, he comes back? Like in Advanced Generation? And Hikari is the newbie trainer, like May? And she rides a bike like May, too? Oh my, it looks as if we have a rehashed Advanced Generation on our hands! Check out what I am talking about by clicking here. When I have told people I hate the writers, I really mean I hate the writers. If the cast does not go back to that CoroCoro magazine page from a few days back with it only being Ash, Hikari, and the purple/red-head guy with Hikorazu (the fire starter), there are going to be a lot of angry fans, since most people (including me) wanted a fresh start. Go away, Brock! 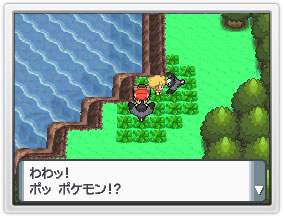 The Beginning of the D/P Games – Will you attempt to walk into the wild and a professor stop you? Will your rival break into the professor’s lab and steal a Pokemon? Will the professor be attacked in the wild by Pokemon and you have to save him? Well, close to the Ruby and Sapphire version, except that YOU and your rival get attacked in the wild! Thanks to Bangiras, we now know the specifics of what will happen!

When the pair arrives at Lake Shinji, unable to suppress curiosity, they step into the grass. When they do, a wild Pokemon suddenly appears! Without Pokemon of their own, how will the main character and his childhood friend survive this attack?

In a dropped trunk nearby, there are 3 Pokeballs! In a split-second decision, the Pokemon inside the Pokeball is used, and it’s able to defeat the wild Mukkuru…but who do the trunk and Pokemon belong to?

The lost trunk belongs to Professor Nanakamado, an expert on Pokemon evolution. In order to return the Pokemon, the main character and his childhood friend hurry to the Professor’s research lab in Masago Town. However, when he sees the attachment the Pokemon has with the main character, the Professor says he’ll give it to him (or her)! So, to see and capture every Pokemon in Shinou, and with the request to complete the PokeDex… the true adventure begins!

Diamond and Pearl Interview – In an interview with Tsunekazu Ishihara, one of the original creators who worked on Red and Green with Satoshi Taijiri, we get to hear some interesting information on the Diamond and Pearl games. For one, Ishihara hints that this game will have more Pokemon than any previous game (which would explain why they have released so many new Pokemon, more than usual, prior to the game’s release). To read the interview, click here.

Two Diamond and Pearl Videos – Nothing new, other than 3D starters and some game footage we have not yet seen (windmills, trains). The first video will play when you open the link, and the second will play when you click the second link under the video window. Check them out by clicking here.