How to Transfer from GBA Games to D/P – The official Japanese Yahoo Diamond and Pearl website has put up a new page detailing how to transfer your old Pokemon to Diamond and Pearl, to which Bangiras has translated from this page. Thanks Bangiras! 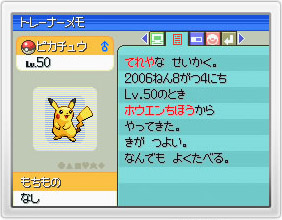 Step 2: Insert a Ruby, Sapphire, Emerald, Fire Red, or Leaf Green game pack into the DS’s GBA slot and go to the D/P start up screen. Along with the usual options of continuing or starting a new game, you will be given an option to transfer Pokemon from the GBA pack that you inserted.

Step 3: The Pokemon storage box from your Advance game will appear on the lower screen of the DS. Tap the Pokemon that you want to transfer and an icon will appear above each one indicating that it has been selected. You can transfer 6 Pokemon at a time but you can’t transfer Pokemon from the same copy of Ruby, Sapphire, Emerald, Fire Red, or Leaf Green more than once in a 24 hour period.

Step 4: The Pokemon that you transfer to D/P will appear in a place called the Pal Park. You need to buy special Pokeballs called Park Balls to capture Pokemon in the Pal Park, which have a 100% catch rate. Pokemon that are naturally rare will be harder to find and capture. Once you capture all 6 Pokemon, they will be transferred to your PC and you will be able to use them in D/P! However, you will never be able to transfer them back to your GBA games, so you better choose wisely on the ones you want to transfer. When you look at the Trainer Memo on the Pokemon’s status page, it will tell you which region the Pokemon originated from.