EDIT #1: Oh man, the news sure looks great with the new layout. I am so glad I made it. (random)

Will update again later today with TCG stuff for sure.

Diamond and Pearl Anime Info – The official Diamond and Pearl Pokemon Anime site has been updated with a new picture of the Diamond and Pearl girl trainer, Hikari, telling us about how she will begin her journey in the new region of Shinou. Bangiras has translated the image’s text below (click the thumbnail following the translation for the actual image). Apparently, this will be a two-hour special airing September 28th in Japan.

Hikari is a ten-year-old girl who lives in the Shinou region. Today is the big day when she leaves on her journey to become a newbie Pokemon Trainer. First, in order to get her starter Pokemon, Hikari departs for the Pokemon research lab in the next town, but gets completely lost. At the research lab, the Starter Pokemon Naetle, Hikozaru, and Pocchama are starting to quarrel loudly. The Pokemon then run away from the lab, causing even more chaos. What kind of crazy trip is this going to be for Hikari?!

The above is most likely the episode that’s title was released a while ago, titled “Journey from Futaba Town to Masago Town!” Since Futaba Town is where the journey begins, one can assume that Hikari is traveling from Futaba Town to where the professor is (which is most likely Masago Town) to choose her starter. You might even be able to go as far as saying that in the Diamond and Pearl games, you will leave Futaba Town and head towards the professor’s laboratory, and on your way, you will encounter the three starters (that escaped) and choose one (although, the video with the briefcase where you choose the starters doesn’t really support this theory – unless the professor gets the Pokemon back and then gets attacked and you have to choose a Pokemon to fight with – yeah, too much thinking). But this is just speculation. 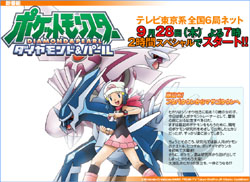 Ash’s New Clothes – Ash will be getting new clothes for Shinou, just like for Hoenn (at least if this scan is legit). Click the thumbnail below to view his new attire. Don’t you love the originality of his hat and gloves?