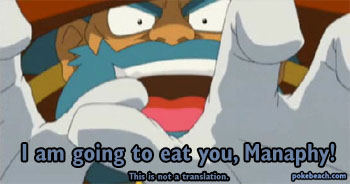 Manaphy Movie Ending – Cunn!ng from SPP forums posted this ending summary to the Manaphy movie, which gives us an outlook on how the movie ends and what happens. Be warned – it is a spoiler.

In the temple, there was a place with an altar and many shining blue crystals. When Phantom got there (the evil pirate in the movie), he started stealing them and putting them into a huge bag. As he took the first crystal from the altar, the room started being flooded with water. Ash & co decide to run away to save their lives and leave Phantom there. As they are leaving, Ash helps May get out of the water that is flooding the room. When she gets out, both Ash and May look into each other’s eyes. That moment was just… wow. On their way out, they meet Jackie (the Pokemon Ranger in the movie). He’s heading to the altar. Ash & co leave, but Jackie enters the room where Phantom is. By that time, Phantom’s bag almost has all of the crystals. Jackie starts fighting Phantom, but he actually doesn’t hit Phantom – he just dodges his attacks, takes crystals from the bag and puts them back on the altar. While they are fighting, the last remaning crystal is taken away by the water that is flooding the room. Phantom tries to follow it, but he doesn’t succeed. The room is flooded almost to the roof, so Jackie leaves as well. While Ash, May, Pikachu and Manaphy are escaping the temple, they see the missing crystal. They decide to put it back, but when they see the capsule (the one that took them there – the submarine), Ash pretends to forget about the crystal and the crew runs for their lives. He puts May into the capsule first, then Manaphy, then Pikachu, and he tells Pikachu to take care of May & Manaphy. May screams “What!?,” but Ash locks the capsule, takes the crystal, and runs away. WPM Note: Sounds a lot like that Trigun episode where Rem tells Vash to take care of Knives. May keeps calling him, trying to stop him. So, Ash runs to the altar room, eventually reaches the place, but he can no longer run – only dive and swim. He turns his hat back, grasps the crystal and jumps into the water. Ash then fails to put the crystal back into the altar, runs out of oxygen, closes his eyes, and almost dies. Then Manaphy uses Heart Swap, and a crying Pikachu and May give power to Ash. He’s back to life. WPM Note: I don’t like Manaphy anymore. Ash swims to the top of the water, breathes more air, and dives again. He finds the crystal on the bottom, and finally puts it in the altar. So that’s what happened. He saved May and Manaphy and prevented Pikachu from following him, just like Aaron prevented Lucario from following him in a dangerous place. Ash really was behaving like a hero, in my opinion.