Diamond and Pearl News – Bangiras has translated the following information from the official Japanese Yahoo D/P website. On the website, you get to talk to several Gamefreak officials, who speculate on the Diamond and Pearl games. However, as Bangiras informed me, Gamefreak has said many things in the past about their games that turned out to be false (in previous generations). Thus, this information is not 100% true yet, although some of it most likely could be (how can you THINK there will be an entire underground world?). After all, Gamefreak always works on the beginning of the game last, since they have the most trouble deciding what to do, so the elemental types could very well change from what is listed below.

An underground world would be cool – you would probably get to go under the mountain. It would make sense, too, since diamonds are underground (if it even has to do with anything). Maybe the top of the mountain will have a research laboratory or something (random thought – since Palukia could come from space or something). Also, changing the characteristics of attacks to match the actual attack and not the element makes sense. After all, Hyper Beam is a beam of energy – not something physical. They probably originally made it Hyper Beam because it does not relate to a specific element, but now they can make attack types more realistic. As for the starters – we finally get some variation in types! Since Darkness Pokemon are immune to Psychic Pokemon, you may not even have a rival battle, or your rival will have a different starter from your set, or the beginning story will be completely different than in previous games!

Parukia’s Name – While we do not know the official romanization of Parukia’s name yet, I found something interesting while browsing the official Japanese website. On one of their pages, they have images of Parukia and Diarugia. See the images here and here.

Now look at the names of the images. “story05_pal.jpg” for Parukia and “story05_dia.jpg” for Diarugia. The “dia” in “story05_dia.jpg” obviously refers to Diaruga’s name, yet in Parukia’s name, it is “pal.” So, could Parukia actually be “Palukia,” since the L and R in Japanese are interchangeable? This is not definite proof yet, however, since when Lucario was first revealed, its image’s name was “Rukario,” so this may not be definite proof yet. We will keep you updated on this as we receive more information. 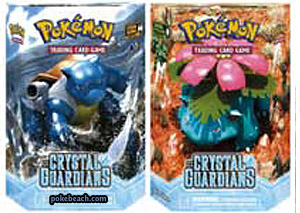 Comic-con Update – I have learned that the train station by Comic-con has WiFi (wireless internet), so I will probably record the new voice actors and take their pictures, then run over to the station and upload them to my site. So, we will have the latest information directly from Comic-con on Thursday concerning the new voice actors, PUSA, season 9, and the English dub of Lucario and the Mystery of Mew, so check back here!

Is this game ever going to come to the USA, and if so, do you know when?
– WPM

Thank you very much for your interest in Pokemon Trading Figure Game.

Yes, we have a plan to release in the US, but the exact release date is not
determined. It is going to be sometime early next year. We plan to update
information related to the US release on our website. Please check our website
for updated information.

So, looks like America will be getting in on the action late for once.