There were some major breakthroughs today on the American EX Emerald set, thanks to [PS-Games]. Here are some easy-to-read facts on the set:

1. Release Date: May 9th, 2005
2. HOLOGRAPHIC BASIC energy cards are available in this set. (yay!)
3. There will be more than 100 cards in the set, including Speed Deoxys, Kyogre, Groudon, and Rayquaza.
4. The two theme decks for the set will be based around Milotic (Water/Grass deck) and Manectric (Lightning/Fire deck).

The website also revealed a scan of a Speed Deoxys card, the booster pack designs, the theme decks, and the set image logo, which you can see by clicking the links below. I was able to make out on the Manectric theme deck image that it would be named “Wildfire,” but I have no idea what the Milotic theme deck’s name is. It looks like Hydro-something, but I can’t make it all out. The second word will probably have something to do with Grass. 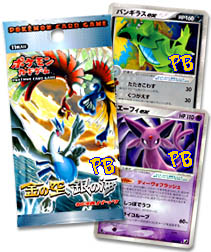 We have some more exclusive Golden Sky, Silvery Sea info today thanks to Vincent! Also, the official Pokemon TCG Japanese website has put up a clearer picture of Espeon ex, Tyranitar ex, and the booster pack of the set, which you can see to the right. Now on with the info!

1. There will be a new Pokemon Tool called “Rage Crystal.”
2. There will be a Ho-oh ex and Lugia ex in this set. (Don’t forget how we posted earlier that there would also be a Shining Ho-oh and a Shining Lugia)
3. Ho-oh ex will have 110 HP. Lugia ex will probably have the same amount as well, though this was not confirmed by Vincent.
4. Espeon ex has 110 HP, not 170.
5. Espeon ex’s second attack reads as “Does 60 damage plus 30 more times the number of your opponent’s trainer cards in play.”
6. Espeon ex has no retreat cost, while Tyranitar ex has a Psychic resistance.

Also, incase there is still some confusion on to whether EX Emerald is “Golden Sky, Silvery Sea,” I pretty much, as well as others, think that the two sets are not the same. EX Emerald will be our next EX set after EX Deoxys, and will probably include cards from the Japanese Emerald Tin and Quick Construction Pack cards, as well as various other Japanese promo cards. “Golden Sky, Silvery Sea” will also probably come to America as the set after EX Emerald, which should be some time in the late summer. However, I do think that there will probably be some cards thrown into our EX Emerald that will be from the Japanese “Golden Sky, Silvery Sea set,” which is what Nintendo has done with various sets in the past, such as with EX Sandstorm where Dunsparce was put in one set early and we got it before Japan.

We will continue to bring you the latest news on EX Emerald and Golden Sky, Silvery Sea, so be sure to keep checking back here!

Pojo.com – THIEVES
Although I hate to do this since I feel it is highly degrading, I feel that I have no other options left and have exhausted all of my resources. For the past few weeks, Pojo.com has been stealing my scans and posting them up in their Card of the Days. While this wouldn’t had been such a big problem had they contacted me asking for permission to use them initially, what really got me angry was that they covered up my watermark with their own logo, thinking that no one would notice that they had stolen the scans from my website. (when you work on editing the scans for like 5 minutes each, you can tell if they are yours right away) All of the scans they have taken from my site have smudges that are the same, the borders are cut the same, the holos marks are the same, and you can just generally tell from where they put their logo that it is meant to cover my own watermark.

After sending them SEVERAL emails to SEVERAL of their staff members, as well as contacting a couple of people who know them over the past few weeks, I still have not received any response from them. Now, I believe they got wind of my message yesterday, which was when they posted their Shining Latias COTD. Instead of acting like reasonable human beings and coming forth to admit that what they did was wrong, they instead decided that they would pull a fast one.

With all of the scans they have stolen, they have always put their logo over my watermark, which practically gives away what they are doing. However, for Shining Latias, they put the logo in the middle of the card instead of where my watermark should be. Then, where my logo should be, they edited the background of the picture to blend in with the rest, trying to make it look like it did not come from my website. You can even see how they copied and pasted a section of the card over the part where my logo should be, which is why some of the holo marks are exactly the same next to each other. If you even look at the holo backgrounds of their cards, such as Altaria and Latias, you can see that they are exactly the same as mine. No two holos are EVER the same.

NEWS STORY EDIT: [A Grumpig Comparison]
(I put the Grumpig comparison up now to show how they stole even more)

So, in closing, I feel that this was the only way to get Pojo’s attention. While I do believe that it is a little low to put up a message like this, what they did was uncalled for, and I feel that by embarrassing them publicly, they will remove my images AND apologize for what they have done on their website. There is absolutely no doubt that they knew that what they were doing was stealing, and that they then later tried to hide it by editing my cards to look as if they did not come from here. It disappoints me that a website who has been up since 1998 would do something as low as this, know about it, try to cover it up, then continue going on with it thinking that they would not ever be caught. Totally sickening, and in my mind, their reputation has been tarnished to me.