Hello everyone! After yet another exciting Regional Championships in San Diego, we’ve continued to see the Silver Tempest format evolve. This time, Vikavolt V finished the job, as Gibson Archer-Tang improved upon my brother’s second-place finish with the deck in Arlington and took down the event. The meta as a whole wasn’t all that different from previous events; Lugia VSTAR still occupied about a third, followed somewhat distantly by Lost Box and Mew VMAX. After that, Regigigas was also popular, as were Eternatus VMAX and Arceus VSTAR, though not in particularly large numbers. In addition, over 25% of the field was off-meta decks.

So, there were a lot of different decks represented in the format as a whole, and yet things were still quite focused on Lugia VSTAR. Given how dominant Lugia VSTAR decks were in Arlington, this made sense. What changed at this event were the final results — not only did Lugia VSTAR not win in the end, but it only had a single Top 8 finish. Instead, the Top 8 results reverted back to the diversity that we had seen earlier in this format, when players adapted to the Lugia-dominated results of LAIC and found a variety of ways to beat it. Only the Lost Box and Arceus VSTAR archetypes had multiple Top 8 finishes, and the two Arceus VSTAR decks were quite a bit different. Effectively, there were seven different decks in the Top 8 of the San Diego Regional Championships. Going forward into the Liverpool Regional Championships, and further into the first Crown Zenith events, I wouldn’t expect much to change. That is, the format still should be focused on Lugia VSTAR, but should also be rather diverse, to the point that you can’t focus on Lugia VSTAR exclusively. When playing in such a format, what you want is a deck that can take on a large number of archetypes, but also has a good Lugia VSTAR matchup.

Of course, that’s easier said than done! One of the hardest things about this format is finding a deck that can do both; it’s easy enough to counter Lugia VSTAR, but if your deck can’t beat enough other decks, you aren’t going to do well unless you get lucky. Likewise, if you can beat most other decks, but your Lugia matchup is only 50-50 (or worse), then you can still have a rough time. While the occasional off-meta deck pops up that can achieve this somewhat well, I’ve found that the most successful archetypes for that sort of focused-yet-broad strategy have actually been the other non-Lugia meta decks! Again, this makes sense; after all, they wouldn’t be meta decks if they weren’t strong against a wide swath of the field, and given how large a meta share Lugia has, they wouldn’t be sticking around if they couldn’t stand up to it. The deck that I think does the best job of this right now is Lost Box, particularly the new forms of Lost Box that have popped up recently. In this article, I’ll be going over this new Lost Box deck, and why I think it is the best play going forward.

The Amazing Addition of Rayquaza 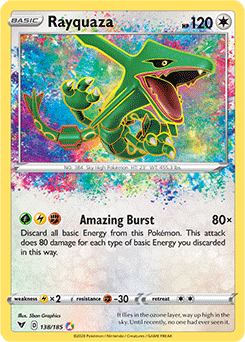 Lost Box has recently seen some innovation, and it has changed quite a bit from the Sableye / Radiant Charizard version that was once most common. In Arlington and San Diego, Mirage Gate versions were most successful. The main change that has allowed those Mirage Gate variants to take over has been the addition of Amazing Rare Rayquaza.

Rayquaza Lost Box still has many of the same traits as the earlier builds — you still do a lot with Comfey, Cramorant, and Sableye — but it comes with the added benefit of a Pokémon with a ridiculously high damage output. In Grant Manley’s earlier article about the Mirage Gate Lost Box deck, he noted that version’s struggle against defensive decks such as Arceus VSTAR / Duraludon VMAX and Mewtwo V-UNION. Against these decks, you can’t quite OHKO them, and their healing makes it so that you often can’t 2HKO them either — at least, not with the old Lost Box builds.

Rayquaza solves this problem entirely. It can OHKO those tanky Pokemon with ease, completely erasing the advantage they had. With two Mirage Gate or a Mirage Gate, an attachment, and a Raihan, Rayquaza’s Amazing Burst can hit for 320 damage, and potentially even 400 if you can find a way to attach a fifth Energy type (which isn’t that difficult to do). Unsurprisingly, this kind of damage output is great in all sorts of other matchups too, including against Mew VMAX and Lugia VSTAR decks. No longer do you have to set up KOs against tanky VSTARs and VMAXs turns in advance; instead, you can simply hit hard with Amazing Burst and take them down in one attack. Of course, if you need to, you can set things up the old way — this Lost Box build doesn’t lose any of the traditional attacking options, giving you the best of both worlds.