Apparently, it’s been over a year since my last installment in the Gym Leader Challenge series, and that’s just a crime. GLC is debatably more popular than Expanded these days, but that’s not exactly a high bar. In the past year, I’ve gotten cards banned from Colorless Control and Amazing Kyogre, so those are unfortunately not playable anymore. I still have some ideas for Colorless Control, but most of my efforts have been put toward a new monstrosity; today I will be sharing GLC Shock Lock with you all. This is my favorite deck to play in recent memory (across all formats), though I’m sure opponents do not enjoy the experience.

If you need a refresher on GLC, check out this article and this webpage.

If you’ve been around for a while, you may remember an Expanded deck known as Shock Lock — this is a deck based around paralyzing the opponent every single turn with Raichu. The original version of the deck used Stoutland to lock Supporters, while also getting access to Lillipup‘s attack to infinite your resources, but the Lightning-type in GLC happens to have the perfect blend of cards to replicate the Shock Lock strategy, though we don’t have the Supporter-locking capability of Stoutland.

I’ve spent a bit of time playing and refining this list, and am quite proud of the result. I wouldn’t be surprised if this deck ended up being deemed too strong and getting banned, even though there are plenty of counters that exist. 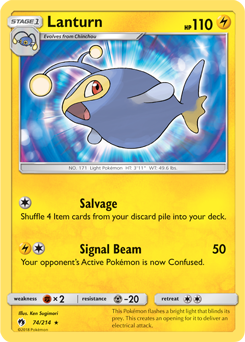 Lanturn has the most broken attack in the game, recovering four Items at a time, allowing us to go infinite, and Raichu evolves and devolves every turn, leaving the opponent paralyzed again and again. Every other card in the deck is dedicated to the goal of achieving the perfect setup.

Lanturn’s Salvage attack prioritizes recovery cards, Scoop Up Net, and Devolution Spray — this allows you to infinitely use the Abilities of Raichu and Manectric. VS Seeker and Pal Pad allow you to play Lt. Surge's Strategy and any two Supporters every turn, so if you aren’t using Thorton or Lusamine to stabilize, you’ll be using two Bellelba and Brycen-Man to deck the opponent out and get rid of their resources.

The deck revolves around Lanturn. Lanturn is the only way to infinite your resources, and Rescue Stretcher and Super Rod are your only ways to recover Lanturn. Fortunately, Lanturn can recover those cards, mitigating the risk of you running out of Lanturn, however, if, at any time you have Rescue Stretcher, Super Rod, and Lanturn unavailable, you lose. These cards sometimes therefore need to be protected, or at the very least, you must be careful and considerate when deciding how to use or discard them.

By extension, Chinchou is the Basic Pokemon that I value most highly — I want to put it into play quickly so that it can evolve into Lanturn and start using Salvage. This bails me out of situations where I had to discard Rescue Stretcher or Super Rod. I don’t want to leave an unevolved Chinchou in the Active where it is most vulnerable to being KO’d.

Raichu gets used every turn during the end-game lock, but you also want to use it aggressively throughout the game. Using Raichu while you set up can disrupt the opponent’s tempo and buy you time. Even if they have a switch card to get out of it, that’s completely fine — switch cards are the only way for the opponent to escape Paralysis, so if they use them before you’ve established the lock, that’s not even a problem. Furthermore, using Raichu allows you to get value out of Scoop up Net and Devolution Spray as you draw into them throughout the beginning of the game.

Member
Amazing Kygore did need to be banned though because of 80 damage to everything and you had silent lab and hex to turn off bench barrier. You had Shady dealings to search out missing pieces alongside Milotic that got the energies.
You must log in or register to reply here.
Share:
Facebook Twitter Reddit Pinterest Tumblr WhatsApp Email Share Link