There’s a lot to talk about with regards to Mew VMAX in the Silver Tempest format. Although it only gets one card from the new set, and that card doesn’t change a whole lot for the deck, there are a lot of interesting meta interactions with Mew VMAX. Lugia VSTAR‘s introduction into the meta is largely good for Mew, as it is a favorable matchup. However, Lugia VSTAR can tech for Mew VMAX to swing the matchup back into their favor, but Lugia VSTAR can do that for any matchup. Lugia VSTAR can be built several different ways, and it won’t always be teching for every matchup. Other decks can still tech Drapion V, but Mew VMAX  can deal with it in a few ways, which I will talk more about below. It will always be a meta call if other players include Drapion V, and if Mew VMAX players need to worry about it. The Latin America International Championships will be the next major event with Silver Tempest legal, and that will likely set the precedent for the meta share of decks like Lugia VSTAR and Mew VMAX. 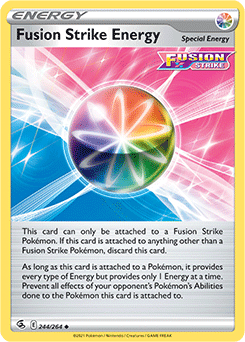 Overall, Mew VMAX is insanely strong and consistent. It has a solid game plan and win condition in every matchup, and can only be unfavored against decks that specifically tech against it. Mew VMAX’s only weakness is that many decks can easily tech against it. Some people are discussing that switching back to the Fusion Strike Energy version might be better. After all, Mew VMAX now has Forest Seal Stone to improve its consistency. However, that is only one card, so it is a small buff to consistency overall. The better argument is that Meloetta offers a secondary attacking option to avoid losing a Prize trade against Drapion V. With Silver Tempest’s release, I don’t think anything changes with regards to the Fusion Strike Energy vs. Fusionless debate.

In my opinion, the best way to utilize Forest Seal Stone is to simply incorporate it into the regular list for Fusionless Mew. However, as this format is brand new, that is subject to change. This wildcard can most commonly be used as an extra out to turn 1 Battle VIP Pass, or to find a combo piece on any of the three attacking turns. Mew VMAX commonly wins with a 2-2-2 line, taking two Prizes on every attacking turn, and Forest Seal Stone sometimes finds that missing Serena or Cross Switcher. Also, against Lugia VSTAR, it can find the fourth damage modifier for a crucial KO. Furthermore, an unused Forest Seal Stone is a get-out-of-jail-free card against Path to the Peak. Here’s my current list: