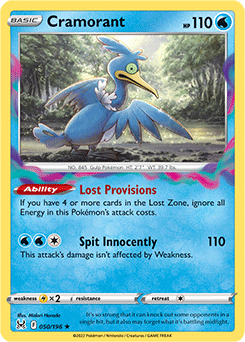 Hello PokeBeach readers! Isaiah here and I am happily bringing you all another article! Last time, I talked about Ondřej Škubal’s winning Arceus VSTAR / Flying Pikachu VMAX deck and its future in the Astral Radiance format as we approach the Baltimore Regional Championships. Since then, Arceus VSTAR / Flying Pikachu VMAX has continued to put up solid results in the online tournament space thanks to its overall strong matchups across the board.

This week, Lost Origin finally released, and with it has come a variety of new decks. Cards like Giratina VSTAR and the rest of the Lost Zone support cards have started to make their case in the Standard format, and they certainly did not disappoint. While Giratina VSTAR has not really lived up to the “game breaking” expectation that people expected, the card has proven to be a fairly strong archetype with a lot of potential. Lost Origin also has produced an interesting environment for single Prize Pokemon, giving them access to a variety of new tools as well as introducing some new single Prize archetypes, and those new options are going to be the main focus of this article. With that, how about we take a look at what the Lost Origin meta has brought for single Prize Pokemon!

The Future of Single Prizers

As we enter this new format, many players will try about every new deck that they can. Obviously, some decks like Giratina VSTAR are people’s main focus due to its incredible power and very clearly being the center piece for all of the Lost Zone support that the set is themed around. Other players will naturally grasp onto archetypes that people have lower expectations for in an effort to be the first to do well with it, which is something that we are already seeing with Kyurem VMAX, a card that many players expected to be mediocre but has already produced extremely strong finishes in online events. Alongside the players who focus on the new archetypes, many players also recognize that many of the decks that were already good do not get any worse, so why bother moving on? After all, Origin Forme Palkia VSTAR and Mew VMAX were two of the strongest performing decks in the later part of the Astral Radiance format and they did not gain any terrible matchups, so why would they get worse? Regardless of which of these groups you find yourself in, you will certainly agree that all of them do exist, and that a meta is balanced around the mix of all of these players. There is one more group, and that group of players are a good mix of all of the aforementioned categories but they all have one shared focus, which is single Prize Pokemon.

As I have already alluded to, single Prize Pokemon are getting stronger with the release of Lost Origin, or at least there will be more options for them, but they also come with some issues. Regardless of if the archetype is new or old, each one of them needs to be able to play around the two biggest issues in the Standard format: Radiant Greninja and the newly released Lost City. Since it was released, Radiant Greninja and its Moonlight Shuriken attack has been incredibly problematic for single Prize decks, as it is one of the most efficient ways to take multiple Prize cards in a single turn while also crippling the setup of an Inteleon deck. Unfortunately, the Lost Origin set did not add anything to solve this issue, but playing Manaphy is always a pretty reliable solution if you are able to recover it if and when you need to. The next problem is the Lost City Stadium, which is a card that looks pretty unremarkable at first. But when you consider that most single Prize archetypes focus on a few copies of one attacker and then recovering it, such as Malamar, sending even a few copies of these cards to the Lost Zone, or even all of them, is completely disastrous and could easily leave a player unable to close out a game. This problem is the absolute worst for Radiant Charizard decks, which are reliant on a single attacker that you can only play one copy of. This means that a single Lost City quite literally ends the game on the spot. With that said, Lost City is fortunately not super common yet so this problem is not a huge deal, but if, or should I say when, Lost City becomes more played, problems could start coming up for Radiant Charizard and other decks of similar nature.

With these two cons, you might be asking, what is good for single Prize decks right now? Well, it is honestly just the same thing that makes them good as always, which is the favorable Prize trade. In a format where it is increasingly common for decks to focus on just multi-Prize attackers rather than focusing on an attacker plus Inteleon, being a single Prize attacker is becoming stronger as this ensures that you will less frequently see random negative Prize trades into good matchups just because they happen to have Inteleon in their deck. Additionally, even in decks like Origin Forme Palkia VSTAR / Inteleon or Arceus VSTAR / Inteleon where Inteleon is historically pretty accessible, many players are shifting away from the ability to attack with Inteleon during a game, making the path even more clear for single Prize decks to get wins, assuming Radiant Greninja does not prove to be an issue.

As for the different archetypes themselves, they can once again be split into old and new. Looking at the old, two archetypes in particular stand out in the new expansion, being Regigigas and Radiant Charizard. While both of these decks struggle with a Lost City hitting the board, they both maintain their strength going forward, and in the case of Regigigas, the deck gets stronger thanks to the combo of Thorton and Yveltal, offering an immediate one-hit Knock Out potential if the opponent is playing a deck that you cannot hit for Weakness easily. On the flip side, Lost Origin brought at least four new single Prize archetypes.