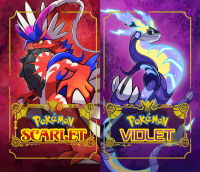 The latest information for Pokemon Scarlet & Violet has just been revealed! It includes the reveal of three new Pokemon named Armarouge, Ceruledge, and Klawf, as well as several new human characters you’ll encounter in Paldea.

The games will feature three stories that allow you to explore the Paldea region in different ways. This includes your typical Gym battles, a search for rare ingredients, and battling the game’s villainous team: Team Star.

There will also be a new “Let’s Go!” feature to automatically send one of your Pokemon off to battle and collect items.

A new Nintendo Switch model will also be released to celebrate the games. 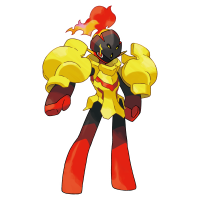 Armarouge’s set of armor belonged to a distinguished warrior and is the source of the energy used for its Psychic-type moves. It also uses the psychic capabilities of this armor to control the fire energy within its body and unleash attacks.

Armarouge can be encountered in Pokémon Scarlet. 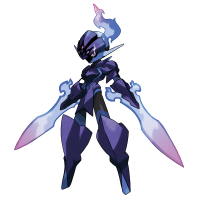 Ceruledge dons an old set of armor steeped in grudges and wields blades made of fire and ghost energy. In battle, these blades transform into great swords to increase Ceruledge’s power. Cuts from these great swords leave wounds from which life energy will flow.

Ceruledge can be encountered in Pokémon Violet. 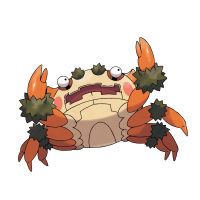 Klawf can rotate their protruding eyeballs to see everything around them, eliminating all their blind spots. They can latch upside down onto cliffs to ambush their prey from above, however, they eventually get dizzy from the blood rushing to their heads, so they cannot stay upside down for very long.

Klawf can be encountered in both Pokémon Scarlet and Pokémon Violet.

Your Own Story, Woven Through Your Treasure Hunt

In Pokémon Scarlet and Pokémon Violet, players are enrolled in a school that will host an independent study project themed, “A Treasure Hunt.” Three stories will be woven into the player’s adventures while traversing the sprawling Paldea region:

These stories are set in an open world teeming with Pokémon and people to meet, so players can determine which path to take and explore however they desire.

Let’s Go! A Handy Feature for Exploring the Paldea Region
Players can have one Pokémon out and walking with them in the Paldea region’s great outdoors. When they have a Pokémon exploring with them in the field, players can use the “Let’s Go!” feature to send that Pokémon off in the direction they indicate. The Pokémon the player sends out then independently picks up items in the area and even has Auto Battles with nearby Pokémon.

Geeta is the chairwoman of the Pokémon League, which operates Paldea’s Pokémon Gyms. Among the region’s Champions, she reigns supreme as the most skilled Trainer of all.

Though mild-mannered, Geeta still has a commanding presence, and it’s said that anyone who calls themselves a Pokémon Trainer looks up to her.

It appears that she is looking for exceptional young talents capable of conquering the Pokémon League.

Brassius is the Gym Leader of Artazon, a town that’s alive with flowers and art. He specializes in using Grass-type Pokémon and is known as the Verdant Virtuoso.

Gym Leader Brassius treats Pokémon battles as works of art and is always in search of artistic quality, using his Gym Test to help judge a Trainer’s aesthetic sensibilities.

His pièce de résistance, “Surrendering Sunflora,” is a statue installation depicting adorable Sunflora with somber expressions. Just what these Sunflora are surrendering to is a topic of debate among connoiseurs.

Mela is the boss of Team Star’s Fire crew, the Schedar Squad. As the team’s best all-rounder, Mela fixes any and every problem thrown her way, though her methods are heavy-handed. She leaves a forceful and gruff impression, but her steadfast devotion to completing anything she puts her mind to has earned her the trust of her teammates.

Note: The uniforms worn by the members of Team Star will differ depending on the version of the game you play.

A Scarlet & Violet-themed Nintendo Switch will be released: