Hello everyone! I’ve already written about my top picks for Worlds, Radiant Charizard Box and Ice Rider Calyrex VMAX with Bibarel, but aside from those, there is one rogue deck that I’ve been playing a lot. It’s a valid consideration for Worlds, and it’s a fairly easy deck to play. A card that’s never seen competitive use before, allow me to present the king of the sea: Seaking. 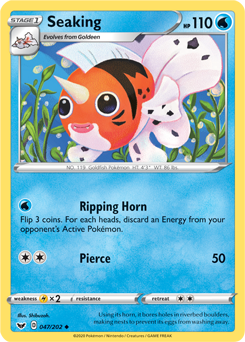 Seaking is a goofy card that combines with Glimwood Tangle, to create a 75% chance to discard at least two Energy from the opponent’s Active Pokemon. This is incredibly strong and reasonably consistent. The current format has no reliable way to remove Energy cards, so Seaking finds a niche there. It just so happens that many of the meta decks are also weak to Seaking’s Energy denial. The deck plays several Boss's Orders for opponents who try to hide Energy on the Bench, and can apply pressure with Seaking’s second attack, dealing 50 damage when there’s nothing better to do for the turn.

The question then becomes: can you reasonably and consistently run opponents out of Energy before they can take six Prize cards? And the answer is usually yes. Although Seaking’s attack with Glimwood Tangle always gives the player favored odds, it is still a coin flip attack at the end of the day. In most games, you can afford one or two bad Ripping Horns, but there are occasions where bad flips will cause a loss. Seaking’s biggest natural enemy is Mewtwo V-UNION, which is a fringe card in the current meta. I don’t expect to see much Mewtwo at Worlds, but it is an unwinnable matchup for Seaking. Mewtwo has an attack that allows it to recover Energy from the discard, and an Ability that blocks Seaking’s attack from ever working in the first place.

I’ve worked on the list quite a bit, and I think its current iteration is pretty cool.

Seaking, being a Water-type, gets to take advantage of the insane Water-type support that the current format has to offer. Irida alongside the Inteleon engine is absurdly overpowered. This combination makes the deck extremely consistent, making it highly unlikely to lose any games to bad draws. I’ve also maxed out the Ball search cards to ensure a turn-two Seaking along with plenty of Pokemon on the Bench.

The deck sets up consistently and quickly. Battle VIP Pass has natural synergy when you’re already playing four Irida. The idea is that you will likely have either Irida for VIP Pass, Sobble‘s Keep Calling, or enough search cards for those openings when you’re forced to go second.

Miltank serves a few purposes. For one, it can force opponents to spread their resources thin, as they cannot simply load up one Origin Forme Palkia VSTAR or Arceus VSTAR with ten Energy and call it a day. If you end up utilizing Miltank, they are forced to commit at least two Energy to Inteleon, and two more to retreat their attacker (in the case you’re against Palkia or Arceus). However, there are many games where you don’t need to do any technical maneuvering with Miltank.

Miltank can also punish opponents who aren’t expecting it. If an opponent doesn’t know about the Miltank, they may over-commit resources to an strategy that cannot easily deal with it. For example, if a Palkia player aggressively loads most of their Energy onto a Palkia by using Star Portal and Melony, they may be able to take six Prizes before Seaking removes all of them. Arceus players may fall into the same trap. If an opponent sees you chaining Seaking, they may focus on a game plan that only takes Seaking into account, and Miltank can punish that. Once again, however, it often isn’t needed. Miltank simply patches up some potential weaknesses in Seaking’s game plan.