Hello everyone! As I’m writing this, I’m trying to prepare for Milwaukee Regionals, but I’m having a hard time deciding what to play. Palkia just took all eight spots in the Melbourne Top 8, which is completely insane. Among my list of potential decks to play is Zoroark Toolbox, which is a deck that has historically been terrible, but is now in a good spot thanks to the addition of Miltank. I think this is the best single-Prize deck out there right now, even better than the Regigigas deck. This is the deck I will be covering today. It’s something of an anti-meta deck, but it has lots of options and versatility. I certainly wasn’t expecting the deck to turn out as good as it has. Here is my current list: 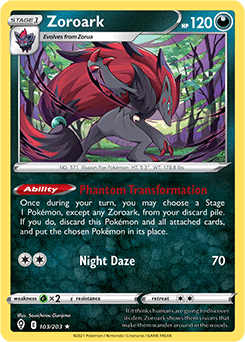 This deck often functions as a counter box deck, but it also has the option to go aggressive with attackers like Wormadam. The Pokemon lineup is designed to be adaptive as possible, and to be able to combat a variety of meta decks. The Trainer lineup is as straightforward as they come: we rely heavily on Bibarel to get out of the opening hand, so we want to establish Bibarel on turn two as consistently as possible. The Trainer cards also help us find a constant stream of Zoroark, which is normally a difficult task but is now quite easy. Three copies of Memory Capsule are included to activate Jolteon‘s Ability, and thanks to Bibarel and the Supporters, the deck can usually draw into at least one Memory Capsule early in the game. Jolteon is the key for beating Inteleon decks, namely Origin Forme Palkia VSTAR.

Electrode is a tech card that gets discussed a lot, but I haven’t found it to be necessary — the deck already has plenty of capable attackers that do not KO themselves. Flapple is another consideration, and it’s a card that I originally tested with, but in practice I found that I rarely used it. It’s not very good, especially when the presence of Miltank already discourages opponents from playing down too many Pokemon.

Wormadam is a fantastic all-purpose attacker that gives the deck some agency and initiative, taking it from a deck that is purely reactive to one that can actually apply some pressure. Wormadam’s typing allows it to combat both Fighting-weak and Metal-weak Pokemon, namely Arceus VSTAR and Ice Rider Calyrex VMAX, and although Arceus will often have Dunsparce in play, Wormadam at least forces them to do so and punishes them if they don’t. We also play two Burmy; since Wormadam is an attacker we will almost always use, we can commit deck spaces to Burmy and allow Zoroark to become other Pokemon (or even more Wormadam). That said, Wormadam’s damage output isn’t that high, especially at the beginning of the game. This is why other Pokemon and strategies are required.

Miltank is part of what makes this deck so strong, adding a win condition and forcing the opponent to have an answer. Sometimes, all you have to do is remove the opponent’s counters to Miltank and you win the game. However, they still can use Boss’s Orders and Cross Switcher to take Prize cards off your Benched Pokemon, and because of this, using Miltank requires you to keep track of what your opponents can and are likely to do, as well as your own board. Sometimes you have to balance and pivot between Miltank and other attackers. Sometimes you have to commit to a  board of only Miltank. Games involving Miltank win conditions are extremely variable, but at the very least, it’s a decent attacker and a roadblock for the opponent. Miltank can also slow the game down at the beginning, which is nice when you’re trying to set up. I’m even considering adding a third Miltank to the deck.