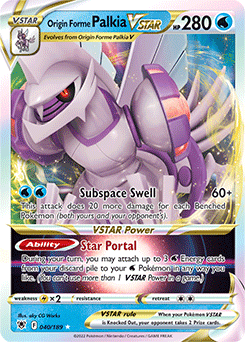 To put it briefly, the Astral Radiance metagame seems to be much of the same from the Brilliant Stars metagame. Decks like Mew VMAX, which won a large grassroots event shortly after Astral Radiance released, as well as various Arceus VSTAR decks, one of which won the North America International Championship, remain good. However, I would be lying if I said there was no change whatsoever. Most notably, Origin Forme Palkia VSTAR is at the front of many players’ minds, and for good reason. Origin Forme Palkia VSTAR is one of the most powerful attackers in Standard right now, capable of hitting for as much as 260 damage for two Energy while having access to one of the strongest VSTAR Powers in the game. In the online tournament space, it has one of the highest win rates in the game, pushing 58%.

With an established “Big Three” decks, the format has room for a variety of rogue decks or specially tailored counter decks. In the Brilliant Stars format, we saw an excellent example of this with Stéphane Ivanoff’s Lille Regional Championship–winning deck, which was a sort of “counter toolbox” deck featuring Galarian Moltres and Galarian Zapdos V that aimed to take down the frontrunners of that format. I think that this same archetype remains viable in the Astral Radiance format, but it will need a variety of changes to deal with Origin Forme Palkia VSTAR and other new threats.

In addition to changes being made to old anti-meta strategies, we’ve seen some new strategies emerging. One of these, which has caught myself and many other players by surprise, is the Regigigas deck. Regigigas occupies a unique niche, offering a way to counter every single meta threat thanks to convenient typing across all of the Regis, with Regirock for Arceus VSTAR, Regieleki for Origin Forme Palkia VSTAR, and more. This deck saw its first play at the same Astral Radiance format grassroots event that I mentioned earlier, and it has been seeing a pretty steady stream of success since then. At that same event, another rogue deck emerged, which was Blissey V / Miltank. Before I talk about this new deck, we need to take a look at how absurdly good the new Miltank card is.

What makes Miltank so good? 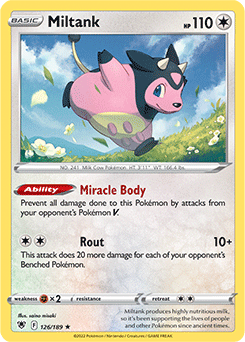 In Darkness Ablaze we saw the release of Decidueye, and later a similar Altaria in Champion’s Path, and both of these cards saw a fair amount of play for the first year of their legality. With the rotation to the Sword and Shield-on format, however, both Pokemon fell off in popularity, largely thanks to the variety of spread decks like Jolteon VMAX in the Evolving Skies format and the explosion offered by the Inteleon engine being able to easily take down such walls if needed. At the end of the day, Decidueye and Altaria just needed too much of a commitment, and didn’t bring nearly enough of a reward. This problem would be made even worse in the Fusion Strike and Brilliant Stars formats, with the emergence of not only many single-Prize attackers like Galarian Moltres but also Mew VMAX with its Max Miracle attack, which cuts through Deep Forest Camo and Miraculous Charm.

However, unlike Decidueye and Altaria, Miltank completely removes the high-commitment-low-reward issue by being a Basic Pokemon. It can reasonably be splashed into almost anything (albeit with varying efficacy) and still be of use for buying a little extra time if not completely walling out select strategies. Throughout the game’s history, there have been a variety of wall Pokemon like Miltank (often called Safeguard Pokemon), from Wobbuffet to Sigilyph to the more recent incarnations like Decidueye and Altaria, but one thing has remained constant: the Basic Pokemon have almost always been far more useful. Miltank’s case is made even stronger by having a good attack as well. Rout has been an extremely common type of attack throughout the game’s history, with Absol‘s Mind Jack being the first that I saw after learning to play. While in the current format a ceiling of 110 damage is not particularly strong, being able to deal a reasonable amount of damage for two Colorless Energy is perfect for a Safeguard Pokemon. Most notably, it is just strong enough to be able to pretty easily take a one-hit Knock Out on Sobble or Drizzile, which can slow down the opponent’s strategy, while also removing one of the biggest threats to Miltank before it can become an issue: a fully-evolved Inteleon.

Making the best use of Miltank is a more difficult task than one would think, though. Unlike some old Safeguard Pokemon, playing a Quad Miltank deck will not be particularly effective in 2022, since there are so many ways to deal with the card if necessary. From here, there are two other options: you can play it as a one-of tech option, or you can make a strategy still dedicated to Miltank, but with an alternate attacker to deal with problem cards. At this point, there is not a particularly popular deck that does the former, but there is one deck that does the latter, being Blissey V / Miltank.