Today, TPCi revealed a handful of cards that will release in the upcoming Pokemon GO set that releases internationally on July 1st. Promo versions of the Kanto starters and the Dragonite VSTAR line were also revealed.

In addition to these card reveals, it was revealed that there will be a handful of in-game events for Pokemon GO players to tie in with the release of the Pokemon GO TCG set. Players will be able to catch Pikachu with a special TCG-themed cap, Mewtwo will appear in 5-star raids, and Wimpod and Golisopod will make their first appearances in GO.

Cards from the Set

Update: Egg Incubator was also revealed! The text is partially covered, but it could read… 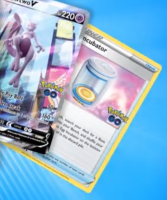 Flip a coin. If heads, search your deck for a Basic Pokemon and put it onto your Bench, and shuffle your deck. If tails, put this Egg Inclubator on the bottom of your deck instead of in the discard pile.

You may play as many Item cards as you like during your turn.

Bulbasaur, Charmander, and Squirtle will release in “Pokemon GO Pin Collections” in Q3. Each collection includes a promo card and an enamel pin.

Dragonite V and VSTAR were also revealed, but we don’t yet know which English product they’ll appear in. The only Pokemon GO product unaccounted for is the “Premier Deck Holder Collection,” so we could see them there. No details about that product have been revealed yet.

The full text of the official press release follows below:

June 6, 2022 — In celebration of the upcoming launch of the Pokémon Trading Card Game: Pokémon GO expansion from The Pokémon Company International, Trainers will be able to experience new in-game events in the Pokémon GO app that are inspired by this special collaboration.

In addition, Pokémon TCG: Pokémon GO products will contain promo codes that can be redeemed for various in-game avatar items, such as a hat and T-shirt combo that matches Pikachu’s Pokémon TCG-themed hat. Promo codes will be valid from July 17, 2022, to July 31, 2024, and can be redeemed at https://nianticlabs.com/tcg-code​.

Trainers will also be able to collect and play with cards showcasing the beloved Bulbasaur, Charmander and Squirtle — plus their Evolutions — as part of the upcoming expansion. Just as Shiny Venusaur, Shiny Charizard and Shiny Blastoise can be encountered in the world of Pokémon GO, these Pokémon will appear as Radiant Venusaur, Radiant Charizard and Radiant Blastoise in the Pokémon TCG with powerful attacks and Abilities.

Available at participating retailers around the world starting on July 1, 2022, the Pokémon GO expansion features cards with photorealistic artwork and unique gameplay scenarios inspired by the popular mobile game.