Hello everyone! It’s an exciting time for the Pokemon Trading Card Game! We recently saw SLC Regionals, and this past weekend Liverpool Regionals has also wrapped up! The top European players showed off some spectacular feats of deckbuilding with crazy lists for both Urshifu VMAX and control variants, of all things. On top of that, Malamar / Inteleon did quite well, taking several Day 2 spots as well as two Top 8 spots. Malamar also placed in the Top 16 in SLC, with both Cinccino and Inteleon versions representing. 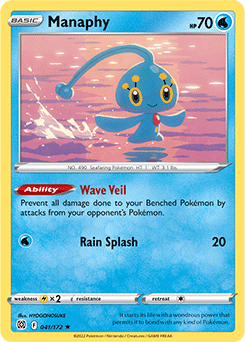 Previously, Malamar was gate-kept from competitive play due to the dominance of Jolteon VMAX, and before that, snipe variants based around Rapid Strike Urshifu VMAX. Snipe decks have dropped off in the meta significantly, however, opening the door for Malamar to emerge and establish its place in the meta. Not only that, but even if snipe decks did become big again (such as after winning Liverpool), Malamar still has the option to include Manaphy to counter them.

After playing Malamar at one of my locals and seeing it do well in Liverpool, I decided to write about the deck today. Not only is Malamar straight-up really good right now, but it’s also inexpensive to build. It’s definitely nice to have a competitive option without cashing in an arm and a leg for Arceus VSTAR or Mew VMAX lines.

Malamar’s game plan is as straightforward as it gets, but the actual gameplay and sequencing can be mind-boggling complicated at times. The Cinccino version is less popular, as it’s widely considered the inferior Malamar variant, but at least it’s simpler, but the Inteleon version is what I’m going to focus on today. Interestingly, Gabe Shumway’s Top 16 SLC list is the optimal 60, in my opinion. The deck has a few other options, such as Turffield Stadium, Gloria, or mixing up the counts of existing cards. My experience with the deck is sufficient but not extensive, so it’s possible that some improvements can be made.

In any case, let’s take a look at the list.

When building or analyzing a list for this archetype, it’s important to consider how the deck plays. This deck is different from many others in that it cannot thin the hand — this is a double-edged sword; on one side, you’ll never accidentally lose important techs to discards. This allows us to safely play one copy of cards like Inteleon, Ordinary Rod, and Boss's Orders. They will simply never hit the discard pile without our say-so. On the other hand, you’re stuck with what you get and have little way to manipulate your hand.

One look at Malamar and you could say I’m stating the obvious that Rapid Strike cards = good synergy, but it actually leads to a lot of tough choices and counterintuitive deck building.

In case you are unfamiliar, this deck’s plan is to simply attack with Malamar over and over. Malamar is capable of OHKO’ing anything in the format — as a single-Prize attacker, this leads to favorable Prize trades against every other meta deck. This is the main reason why Malamar is good. Drizzile and Inteleon ensure the use of Cynthia’s Ambition every turn, as well as helping fill the hand with Rapid Strike cards for Malamar. Cynthia’s Ambition only works if your Pokemon was Knocked Out — if that’s not the case, you are not being pressured, so that’s also fine. You may not find OHKO’s without Cynthia’s help, but if the opponent isn’t working towards their win condition by taking KO’s, that doesn’t matter. 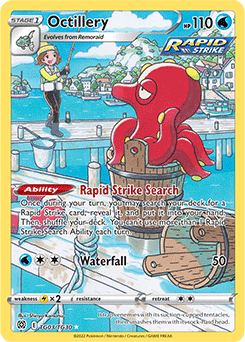 Octillery provides obvious synergy to the deck, and it also acts as bait. Many players see Octillery as a big threat, as it provides a ton of value over several turns, however, in some cases, KO’ing the Active Malamar is actually better than taking out Octillery. Octillery finds one card per turn, so the Malamar player only has to find one extra card to make up the value that is lost by not having Octillery. On the other hand, the Malamar player has to find a replacement Malamar, Inkay, and Energy if Malamar is KO’d, and that’s three cards.

There are exceptions though. Octillery can be scooped up for plus 80 damage in a pinch, so opponents are also removing that option, and you’ll probably end up playing down another Remoraid and Octillery at some point, which evens out the number of replacement cards. It can be hard to tell when taking out Octillery is optimal or actually a trap, but that’s something opponents have to worry about and not you.