Hello PokeBeach readers! Isaiah here and I’m happy to be bringing you another article!

Last time, I took a deep dive into Charlie Lockyer’s Arceus VSTAR / Beedrill / Flygon V with Sandaconda VMAX, which he used to finish 9th place at the Salt Lake City Regionals. Since then, Charlie’s deck, which is affectionately known as Desert Storm, has seen a fair amount of play, including several solid results in online tournaments as well as a day two finish at the Liverpool Regional Championship! 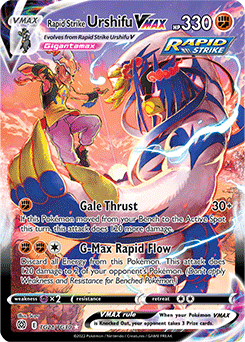 Speaking of the Liverpool Regionals, that event brought us one of the biggest surprises of the season, with Robin Schulz taking down the event with his Rapid Strike Urshifu VMAX / Galarian Moltres deck! While this deck on its own was rather surprising, as many players had generally written Rapid Strike Urshifu VMAX off, Robin Schulz’s deck took it a step further and also played a remarkable 22 one-ofs, which is borderline unheard of, barring in some control decks. Each of these 22 one-of cards served a unique purpose, however, and each of them directly contributed to Robin Schulz’s victory in the end.

Stepping back a bit, going into Salt Lake City Regionals, Charlie and I had been talking about decks a lot prior to the idea of Sandaconda VMAX, largely because he had not played a lot during the hiatus of in-person play. As we ran through cards and decks and what rogue decks could be good into the Mew VMAX centered meta, one idea that kind of stuck to both of us was the Lightning variants of Arceus VSTAR, focusing on Flaaffy as a form of extra Energy acceleration alongside that of Trinity Nova. In the final week before the event, Charlie and I spent a lot of time working on these Lightning variants of Arceus VSTAR, and until he was made aware of the deck that would ultimately become Desert Storm, Lightning Arceus VSTAR was one of Charlie’s top picks.

Throughout our testing, we came to two solid variants of the deck, one that Charlie suggested that focused on Vikavolt V for a lockdown strategy, and one that I suggested that focused on dealing big damage with Boltund VMAX. While we were never absolutely certain of which of these variants was ideal, we spent a lot of time on both, and I think we are both confident that they could do well at a tournament. Without further ado, let’s first take a look at Charlie’s Vikavolt V-focused build.

As you may notice, Charlie’s Arceus VSTAR / Vikavolt V deck has a lot going on, but rest assured, the deck is far more simple than it looks. This deck is built to basically force the opponent to play at your pace while you slowly amass Energy on your board before stringing together big attacks with Raichu V to close out the game. This deck accomplishes this goal by abusing the format’s strong reliance on Item cards for setup by completely locking the opponent out of being able to access them. In addition, the deck is able to use Arceus VSTAR as a multi-purpose centerpiece of the deck, offering either strong Energy acceleration with Trinity Nova or instant access to a combo with Starbirth.

With all of these options at its disposal, it should be pretty clear that this deck is highly effective at being able to build a favorable game state and claiming a victory, even if it takes several turns to do so.

As I have already stated, Vikavolt V is the primary focus of Charlie’s version of Lightning Arceus VSTAR. At first, I was a bit skeptical of Vikavolt V’s value, focusing on how it did comparatively little damage with either attack, but as I would learn with some testing, I was sorely mistaken… 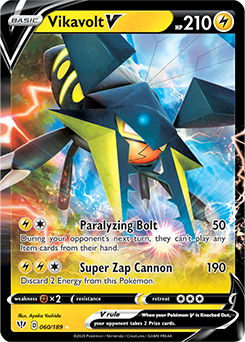 Many readers may not remember back in 2014 through 2016 where Seismitoad-EX was the ruler of the format, but I am sure a fair number of you do. For those who do not remember, Seismitoad-EX was the center of the format for almost its entire legality, offering decent damage for the time period for a single attachment in an era that largely focused on Item cards. In the modern era, this low damage for Item lock trade-off is not as strong as it once was, making a solo-Vikavolt V deck nearly impossible, but there was one particular Seismitoad-EX variant that did things a little differently that might be better to focus on.

In Spring 2015, there was a Seismitoad-EX / Yveltal-EX deck that dominated that season’s State Championships. Unlike other Seismitoad-EX decks that focused on lockdown strategies, often never letting the opponent play Item cards for the entire game, the Yveltal-EX variant used Seismitoad-EX to slow down the opponent in the early game so that you had time to load several Energy on Yveltal-EX so that its Evil Ball attack would be capable of massive damage. Back to the present day, Charlie’s deck is able to recreate this strategy by using Vikavolt V to buy time like Seismitoad-EX would, making room for a late-game sweep with Raichu V like Yveltal-EX would do.

Notably, Vikavolt V proves to be exceptionally strong against Mew VMAX, which is a deck that is heavily reliant on Item cards. As a result, Vikavolt V is able to lock them out of drawing cards in a way similar to Path to the Peak, but unlike Path to the Peak, your opponent cannot get lucky and “draw out” of the Vikavolt V lock. Additionally, Vikavolt V can be used to trap Genesect V in this same matchup, which is something that I will go into in greater detail later.

In a sense, Raichu V acts as this deck’s main attacker, but not in the conventional sense. Like many main attackers, Raichu V will likely be taking a majority of your Prize cards in any particular game, however, unlike most main attackers, Raichu V will not be attacking except in the final few turns of the game. In this deck, where we focus on buying time with Vikavolt V in order to build the board we want before running through the opponent, Raichu V is critical as a way of not only dealing massive damage but for closing out the game faster than our opponent can once we get to that ideal board state.

Despite its importance, I have put a fair amount of thought into the prospect of cutting the second Raichu V, but every time I have done so, I have immediately missed it, even with the copy of Ordinary Rod that would normally fill a similar purpose. The experience alone has singlehandedly made me confident that two Raichu V is the correct count in this deck.

In my experience with both mine and Charlie’s Arceus VSTAR Lightning decks, the biggest value is seen from Starbirth, solving a lot of the consistency problems that Flaaffy decks normally have by producing an instant-access search for Energy to discard, pieces of the Flaaffy line, or even a Supporter card when you need them. In addition, Arceus VSTAR acts as a solid attacker, both dealing moderate damage while also loading up your board with Energy cards, translating to more damage potential with Raichu V. As a result, Arceus VSTAR, in addition to the value of Starbirth, opens up an entire secondary game plan with this deck that focuses on early Raichu V burst damage rather than a slow climb to peak Raichu V damage.

Overall, Arceus VSTAR is the perfect connection for all of this deck’s strategies, making the deck’s success far more consistent. 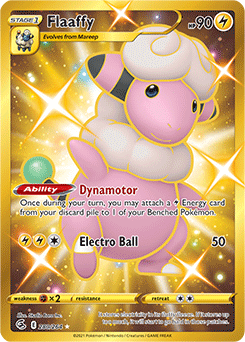 The purpose of the Flaaffy line should be quite obvious, acting as this deck’s primary Energy acceleration. In addition to the Energy acceleration for building up costly attacks faster, Flaaffy also offers Energy recharging following a big swing with Raichu V. Thanks to this built-in Energy recharge, we are able to easily close out a game in two attacks against VMAX focused decks once the time finally comes to break the Paralyzing Bolt lock.

As for the 3-3 line itself, it has generally felt correct, being the perfect balance between not too much such that it gets in the way, but not too few so that you still can reliably get it out. In most games, you probably will not need more than two Flaaffy at a time, but having access to the third opens up several options, which easily justifies the inclusion. I also want to note that I am still not entirely sure of which Mareep card is ideal, but I settled on the Mareep from Evolving Skies because of its Retreat Cost of one and the ability to deal 30 damage, which does 60 damage to a Sobble after Weakness.

One of the more memorable moments of my work with Charlie leading up to Salt Lake City was his reaction to learning what Yveltal did, as he had not even heard of the card prior to me bringing it up as what I assumed was common knowledge. Yveltal was a big part of Charlie’s theory with this deck, as it offered an additional win condition against Mew VMAX thanks to its ability to wipe the opponent’s board of Energy, turning Energy removal into a viable win condition, in addition to Prize-based win conditions.

Thanks to Flaaffy, it is super easy to power up a Yveltal out of nowhere, meaning that you can always simply drop it at the most opportune time to maximize its value.