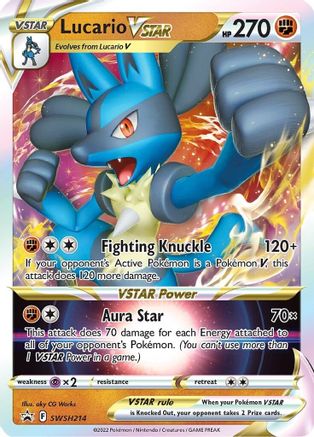 Hello everyone! Astral Radiance might not be coming out for another month, but Pokemon has nonetheless given us a taste of what’s to come. Most of the cards from the recent Japanese Pokemon VSTAR decks will be coming out in Astral Radiance in May, but they decided to release Lucario VSTAR a bit early in the new Lucario VSTAR Premium Collection. Notably, we don’t have to wait to use this card — it will be legal for tournament play in the Europe International Championships (EUIC), and in fan-run events you can play it now. Box sets like this aren’t always good, but this one certainly is, as Lucario VSTAR is on par with our existing Pokemon VSTAR, even exceeding them in some regards. So, in this article, I’ll be taking a look at our newest Pokemon VSTAR: Lucario VSTAR!

Compared with the other six Pokemon VSTAR we have so far, Lucario VSTAR stands out with its damage output and its typing. While its Weakness isn’t ideal, being a Fighting-type means that Lucario will match up well into some of the best decks in the format, including Arceus VSTAR, Gengar VMAX, and Jolteon VMAX. Even without Weakness, Lucario is still a force to be reckoned with. While Fighting Knuckle is conditional on your opponent having a Pokemon V, most of the things you need extra damage to deal with are Pokemon Vs, so you can assume that you’ll be hitting for 240 damage most of the time, not 120. If you are attacking for 120 damage, you’ll be likely to take a Knock Out anyway, since most non-Pokemon V are below that range. Malamar and Inteleon are the two main exceptions, so it is something to be aware of — but for the most part, we can treat this as a three for 240 damage attack. That’s a higher damage output than any other Pokemon VSTAR, and with no major downside. With a Choice Belt, this means that Lucario VSTAR is capable of taking an OHKO against pretty much any other Pokemon VSTAR; the only ones that would be out of its range are Arceus VSTAR and Charizard VSTAR, but Arceus VSTAR is weak to Fighting-type, and Charizard VSTAR has to have damage on itself in order to fully use Explosive Fire, so it can typically OHKO them as well. Fighting Knuckle can also OHKO many of the tankier basic Pokemon V — even if they have a Cape of Toughness attached. This importantly means that Lucario VSTAR can OHKO Suicune V, Zacian V, and Galarian Zapdos V, totally disrupting those Cape of Toughness strategies. Aura Star can also be a devastatingly strong attack against any deck that tends to put a decent amount of Energy on the field. If they have five Energy attached — basically, a main attacker plus a follow-up — Aura Star can Knock Out even high-HP Pokemon VMAX. Against something like Duraludon VMAX that relies on its bulk, Aura Star is a useful asset to have. If nothing else, forcing your opponent to play around Aura Star can put Lucario VSTAR decks into an advantageous position, even if you can’t actually manage to take a Knock Out with it.