A new Manaphy promo was revealed in an ad for May’s issue of CoroCoro Ichiban, due out April 21st in Japan. 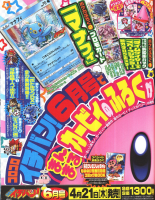 [W] Rip Current: Your opponent reveals their hand. Put up to 2 Basic Pokemon you find there onto their Bench.