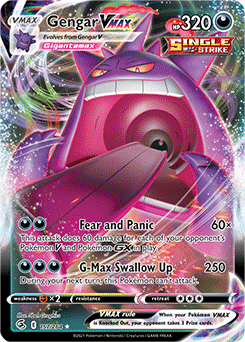 Hello to all Pokebeach readers, here is Gabriel again with another Pokemon TCG article. This time I’m going to talk about one of my main options to play in the São Paulo Regional Championships happening in a few weeks, Gengar VMAX.

It’s been a little over a month since I wrote about Gengar VMAX with Path to the Peak, but due to the arrival of Brilliant Stars the metagame has completely changed. Some differences can be noticed right away, such as the increase in Mew VMAX‘s strength due to the arrival of Ultra Ball, Choice Belt, and Double Turbo Energy, helping the deck retain its position of Best Deck In Format. There is also the new Arceus VSTAR, which is becoming more and more prominent as players are studying the various list-building possibilities this Pokemon has to offer. The good part is that both Pokemon have a hard time against Gengar VMAX, because Gengar VMAX can Knock Out these Pokemon with one attack, whereas they can’t easily take a OHKO in return. Mew VMAX would need to hit four Power Tablet to get a KO and Arceus VSTAR needs a Galarian Zapdos V or any other good answer to cover this issue. Also, both decks will suffer greatly from Path to the Peak.

But it wasn’t just the shift in the metagame that favors Gengar VMAX with Path to the Peak, there are two other great cards that arrived to improve the deck further. One of them is the return of the good old Ultra Ball, which offers the option to search for both Basic and Evolution Pokemon — it can perform the function of Quick Ball and Evolution Incense, but at the price of discarding two cards from the hand. And speaking of discarding cards from the hand, here comes the second card that arrives to alleviate the big problem of consistency that this deck has, which is Bibarel. Due to using Ultra Ball and Quick Ball for fetching Pokemon, it is normal to have few or even no cards in your hand, so Bibarel is perfect for filling your hand again with up to five cards. This provides great consistency throughout the entire game even with Path to the Peak on the table. The idea is to need to use Crobat V on the first turn if necessary for an ideal setup and then follow up with Bibarel for draw power. It will basically be a Crobat V for five cards from the second turn to the end of the game, if everything goes to plan.

In addition to all these news and changes, another reason that made me want to talk about Gengar VMAX again in such a short time here at Pokebeach has to do with the return of Regionals in some parts of the world, including Brazil. Gengar VMAX can be a great choice for these major tournaments! In my previous article I focused more on understanding and explaining every detail of the deck, something that helped me understand its strength and positioning in relation to the metagame. Thanks to all the knowledge acquired, I could quickly see that Gengar VMAX’s moment may be now.

The list that I’m going to present in today’s article finished Top 8 in two big online tournaments recently, one by me and another by my friend Leandro Fernandes, and on both occasions we felt that the deck could easily be champion. This consistency in results perfectly reflects the improved consistency in the deck due to the new additions, as the deck can now make and maintain its strategy throughout the game with less chance of failure, something that was very difficult to do in the previous format. And as strong as a deck is, if it is not consistent enough to accomplish what it sets out to do, then it can’t be considered competitive. In a tournament you have to execute the same strategy dozens of times, especially in a high level compeition like the Regional Championships.

Another Level of Consistency with Brilliant Stars

The arrival of Mew VMAX and Genesect V took the game to another level where you can Knock Out practically any Pokemon you want, because reaching 330 damage on the second turn or using three Boss's Orders in a row was extremely possible, as the deck’s resources and absurd consistency allows you to make these plays. No other deck in the format could play the way Mew VMAX can, so the format became Mew VMAX and decks that try to beat Mew VMAX.

With the arrival of Brilliant Stars we still have Mew VMAX at the top, but little by little this is changing and this is all about consistency, as it is now possible to build decks that can play similarly to Mew VMAX thanks mainly to Arceus VSTAR , Lumineon V, and the return of Ultra Ball. Like Mew VMAX, it’s possible to make Arceus VSTAR lists without needing any draw Supporters, just using the Pokemon’s Ability to get the cards you need to take the six Prizes fast and win the game.

All these Pokemon V with strong Abilities in the format makes Path to the Peak more and more dangerous, especially if decks look more like Mew VMAX, meaning less and less draw Supporters are played for additional copies of Boss’s Orders. And that’s another plus point for Gengar VMAX.

You Need More Than Professor’s Research, Marnie, and Crobat V 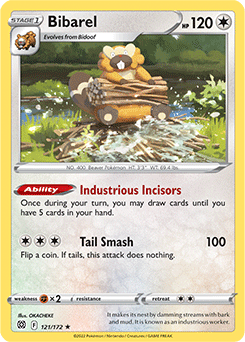 It seems strange to say this now, almost two years after these two Supporters were released, but it’s important to point out that Crobat V was never just a resource to increase your draw power but also to save you when you don’t have either Professor's Research or Marnie. The problem is when you need to use Crobat V and have Path to the Peak on the field. If the Gengar VMAX deck is focused on playing that Stadium card whenever possible, then you can’t rely on Crobat V during gameplay. Usually you can use a Crobat V on the first turn to make a good setup, but then you don’t have to use more Ability with Pokemon V, because Path to the Peak will be on the field to damage the opponent.

The main reason that made me think that Gengar VMAX was not one of the best decks of the past format was precisely the lack of draw power during the game after the first turn. In some games it was possible to complete the game only with using draw Supporters, but in others it was common for me to use Marnie and not find another draw Supporter. I was forced to play with whatever I had in my hand, sometimes to the end of the game or until I found another Supporter.

But now with the arrival of Bibarel, this has completely changed and it is now possible to use Marnie without having the fear of not knowing if you will have draw power for the next turn.