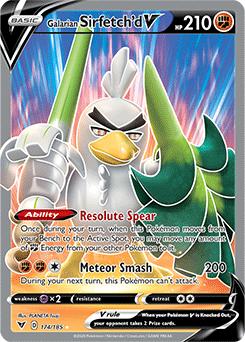 Hello to all PokeBeach readers! Here’s Gabriel again with another Pokemon TCG article. Today’s article is about Galarian Sirfetch'd V / Galarian Moltres, the Best Budget Deck in Format (BBDIF). If you, like me, are waiting for Brilliant Stars to launch to help you decide which cards and decks to invest in real life (IRL) but you already want to play competitively in the current Standard format without spending a lot, then this is the ideal deck for you.

The first time I saw the Galarian Sirfetch’d V / Galarian Moltres deck in action was at an IRL tournament I participated in here in Sao Paulo about a month ago. I saw my friend and fellow player Vinicius Fernandez pilot the deck to take second place in a tournament with about 2o players. After the tournament, I asked Vinicius why he chose to play the deck. He said it was because the deck was good and cheap. The answer caught my attention, because it really made sense at the time not to spend so much money to buy an expensive deck like Mew VMAX just to play at some local events, since no official tournaments in Brazil had been announced. However. two Regionals in Brazil were recently announced for April and May and now it makes sense to invest more in cards if necessary, especially with the arrival of Brilliant Stars.

I also decided to buy a Galarian Sirfetch’d V / Galarian Moltres deck for myself while waiting for Brilliant Stars to arrive to make new investments. I believe that this BBDIF deck perfectly fulfills the function of having a good and cheap deck for IRL events in the Fusion Strike format. But that doesn’t take away from the fact that the deck is a good choice for online tournaments too, as the deck has gained popularity by getting good results from recent online tournaments.

At first glance, the Galarian Sirfetch’d V / Galarian Moltres’ deck can be seen as a great counter to the two best decks in the format, Mew VMAX and Jolteon VMAX, because clearly the deck was developed to win against both these matchups. Little by little though, you realize that the deck has more quality to be able to go toe-to-toe against other matchups too, all you need to do is just improvise a little. In the end, the biggest challenge is not to win the two matchups that the deck was designed to defeat, but to try to improvise against all the other matchups in which the deck was not designed to play against.

Getting Snorlax at the start of the game is the perfect Pokemon to use in your first few turns to setup your Cinccino. This is a deck that will only make good attacks at the end of the game, so don’t worry about losing some Prizes without attacking or picking up Prizes.

If the opponent also adopts a passive stance, that is, if the opponent also decides not to attack or take Prizes, then you will need to take an offensive stance using Hoopa as it is necessary for you to provoke the opponent so that he gets Prizes, because that is the only way Galarian Moltres will be able to deal 220 or 270 damage with its attack. 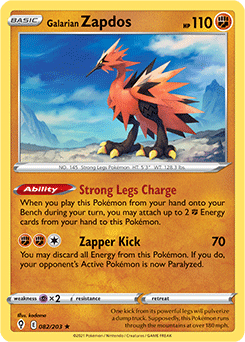 The main surprise of this deck is definitely Galarian Zapdos. This Pokemon has two main functions. The first is to serve as a Pokemon with free Retreat Cost so you can promote your other Pokemon, because as you can see, Hoopa needs to come off the Bench for it to attack while Galarian Sirfetch'd V needs to come off the Bench for its Ability to activate. As for Galarian Moltres, it needs to be put to the Bench from the hand so that you can set two extra Darkness Energy onto it — with that in mind, it also needs a Pokemon in the Active Spot so that you can immediately attack without relying on Switch or Air Balloon. The second and more obvious function is to be able to drop two extra Fighting Energy on the field so that Galarian Sirfetch’d V can take it with its Resolute Spear Ability to attack with Meteor Smash.

In addition to these two great functions, it is important to mention Galarian Zapdos’ Zapper Kick attack, which in addition to dealing 70 damage, you can choose to leave your opponent’s Pokemon Paralyzed, but for that you need to discard all Energies. Despite having a relatively high cost, this has the power to make the opponent unable to attack on their turn, and is a huge advantage if it works. In some online tournaments where the opponent’s deck list is open and you know exactly how many resources the opponent has to get out of the Paralysis, you can plan to use this attack at a time when the probability of leaving the opponent’s Pokemon Paralyzed on their turn higher or even with a 100% chance of succeeding.