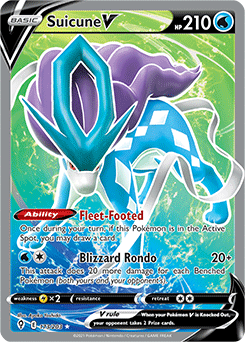 Hello to all PokeBeach readers! I’m excited to return for another Pokemon TCG article, and this time I’ll tell you my experience and the great results I’ve had with a Suicune V and Galarian Moltres V deck created during my testings with Nathalia Fernandes, my testing partner since 2013.

The deck idea came from our desire to find something that could stand toe-to-toe against Mew VMAX, the “best deck in format” (BDIF), in addition to competing against as many decks in the metagame as possible. To arrive at the final idea of ​​the list, many influences and experiences from our current tests and even tests and creations from the past served a lot to compose this deck list — the funniest thing is that I know exactly where these influences came from.

Despite having the idea for this deck created about two months ago, it took me a while to actually use this deck in a tournament. Nathalia was very excited about the deck and wrote an article about it in mid-December 2021, but it was only published on January 6, 2022. At first the deck went unnoticed, but a Brazilian player saw the banner advertising the article and decided to create a list from the little information he could peruse, as he did not have access to the entire article. It was then that he made a version of Suicune / Birds with Inteleon plus a few other different cards from our list and managed to finish Top 16 in an online tournament. After that, the idea started to slowly spread over the internet, but the real Suicune / Birds deck list created by me and Nathalia had not yet been used in tournaments, it remained hidden in that article.

It was then that I decided to play with the original Suicune / Birds deck list, to start the year 2022 well. The result? I got great results in two tournaments in a row. Adding the results of the two Top 8 finishes, my performance with Suicune / Birds was 33 wins, 8 losses, and 4 draws (all intentional draws to guarantee top cut).

With all this in mind, here is my analysis of Suicune / Birds, this amazing deck that I really enjoy playing.

Influences Behind the Creation of the Deck

In the current metagame, we don’t have any decks with this mechanic. However in past formats, we have several examples of decks that are able to accelerate Energy rapidly. The rotated Arceus and Dialga and Palkia-GX / Zacian V deck used Metal Saucer plus Energy Switch to be able to attack with Altered Creation GX on the first turn.

For this mechanic to work, you need a deck that can draw and discard many cards in the same turn. This is something not happening in the current metagame, since the main mechanic used is Drizzile and Inteleon Shady Dealings. This is a slow mechanic but it is able to search for the exact cards you need.

Another weakness we noticed in the current Standard format is that most decks can’t attack on the first turn, except for Mew VMAX that can hit 300 damage with Meloetta. The common strategy of many metagame decks is to fill the board with basic Pokemon so that on the second turn you are able to attack with your Pokemon VMAX.

Bearing that in mind, and with the experience of playing with Suicune V and Melony for months, it would seem natural to max out Melony counts and change the deck build so that you have a higher probability of using Melony and attacking with Suicune V in the first turn, just like Reshiram and Charizard-GX did with Welder in past formats.

In the end, the idea was adapted to fit two types of Energy acceleration in the deck, Galarian Moltres V plus Energy Switch and Melony. But the concept remains the same, striking hard from turn 1.

I saw this combo being used in a Rapid Strike Urshifu VMAX / Galarian Moltres V deck and I really liked it. Players have been trying to get these two Pokemon to work together for a long time, but it seems that this combination has never been consistent. After some testing, I realized that while the deck was interesting and Galarian Articuno V with Rose Tower was really a good combo, it wasn’t exactly the combination this metagame needed. The need to attack or likely KO the opponent’s Pokemon on the first turn with Suicune V or Galarian Moltres V is better than waiting until the second turn to attack using Rapid Strike Urshifu VMAX.

Some Pokemon like Suicune V and Galarian Moltres V are amazing to develop a deck around, because they are very good and are easy to adapt to different strategies. In both current and past formats, we can see several decks created with Suicune V or Galarian Moltres V. Suicune V’s most popular decks are Suicune V / Ludicolo, Suicune V / Crushing Hammer, and Suicune V / Ice Rider Calyrex VMAX, while Galarian Moltres decks V include Eternatus VMAX, Dark Box / Inteleon, Sylveon VMAX, and Rapid Strike Urshifu VMAX.

If both cards are good and easily adaptable with other Pokemon, what happens if you combine these two Pokemon into one deck? It looks like a perfect match.