Hello to all PokéBeach readers! Here’s Gabriel bringing another Pokémon TCG article. This time I present the Galarian Moltres / Inteleon deck; a deck mostly consisting of single-Prize Pokémon, and focused mainly on beating the best deck of the format — Mew VMAX / Genesect V. 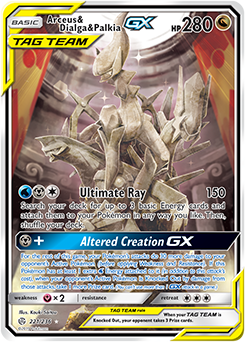 Although 2021 was marked by being another year of the pandemic, I believe it was an interesting year for Pokémon TCG, full of online tournaments, many creative decks, and a mix of interesting formats (and boring formats…). Much of the year we had the controversial Arceus and Dialga and Palkia-GX /Zacian V deck as one of the main decks in the format, along with the classic Pikachu and Zekrom-GX deck, which was a front-runner for practically all the time it was legal in the Standard format.

September arrived, and with it the rotation as well, completely transforming the format and consequently the metagame. Everything was going wonderfully until the release of Fusion Strike and with it the arrival of one of the strongest decks I’ve ever seen; Mew VMAX / Genesect V.

The impact caused by this deck completely transformed the healthy metagame we were living in, making strong decks look like Theme Decks in the face of so much strength and consistency. Before Fusion Strike it was common to see several decks winning tournaments, decks like Rapid Strike Urshifu VMAX, Single Strike Urshifu VMAX, Jolteon VMAX, Leafeon VMAX, Suicune V / Ludicolo, and Zacian V / Zamazenta V were all at a similar level, and it was possible to see a different champion deck at each individual tournament. All that has changed recently, however,  and now we’re seeing the dominance of Mew VMAX / Genesect V, as it’s a practically perfect deck.

I often say that to know if a deck is truly competitive, it needs to do well on three factors; first, the deck needs to be strong, second, the deck needs to be consistent, and third, it needs to do well in the metagame it’s in. Mew VMAX can excel in these three categories for success, as it is possible to draw up to 24 cards in the same turn with a full roster of Genesect V in play,  in addition to cards such as Battle VIP Pass, Cram-o-matic, and Rotom Phone that only further enhance your draw power.

Next, we’re talking about a deck that can hit 210 damage (or more) on the first turn with Meloetta and Elesa's Sparkle, while on the second turn Mew VMAX will easily hit 210 damage by copying Genesect V’s attack.

The third point is where other decks can dedicate themselves to being able to beat this perfect deck, which is the metagame. Darkness-type decks or decks with high Path to the Peak counts are the main villains for Mew VMAX, but even so, these strategies aren’t good enough to guarantee victory. A good Mew VMAX game start and a slightly poor Single Strike game start can be enough for Mew VMAX to get the upper hand and Knock Out the active Pokémon V before it’s even possible to evolve the first Umbreon VMAX or Gengar VMAX, while a Jolteon VMAX deck with four Path to the Peak can still lose if Mew VMAX finds their Stadium cards to remove Path to the Peak from the field.

If not even the best competitive metagame strategies are enough to consistently beat Mew VMAX, then the only way to maybe conquer that is to build a new dedicated deck purely to beat it… 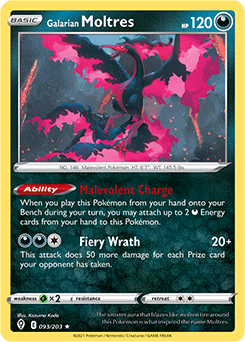 The first time I saw a Galarian Moltres deck was a month ago, curiously when I first played Mew VMAX on Pokémon TCG Online (PTCGO). I remember that the cards were prohibitively expensive, and Fusion Strike had not yet been released in Brazil, because the company that manufactures the cards here had problems, creating a delay of two weeks. It was then that a friend of mine decided to pay a little more and buy the cards to build the deck on PTCGO, so I and some curious friends got together on Discord to all play together with the deck.

After about 30 consecutive victories with everyone completely dissatisfied with the absurd power of the deck, we were faced with a Galarian Moltres deck. At first, it looked more like a bad deck, but as the game went on, we realized that it was actually a well-thought-out deck, specifically designed to beat Mew VMAX, as each Galarian Moltres Knock Out spawned another hitting harder and harder.

I don’t know who created the deck at the time — maybe the idea came from Japan — but recently legendary player Ross Cawthon used Galarian Moltres to win an online tournament, having beaten every Mew VMAX he faced. What caught my attention is that he also managed to beat Suicune V / Ludicolo, Single Strike, and even Jolteon VMAX, that is, it’s not only a deck that only beats Mew VMAX, but a deck with competitive power to face other decks too.

The big advantage of the list that will be analyzed below is the fact that the deck is practically completely composed of single-Prize Pokémon, in other words, your opponent needs to achieve six Knock Outs to win, and in some matchups, this means that the game will last at least six turns.

While your opponent needs to attack six times to win, sometimes you’ll only need two Galarian Moltres attacks to beat Mew VMAX. In the current format, a match usually lasts about four turns and the current decks are not designed to handle matches a little longer, meaning you already start the game with a small advantage. On the other hand, single Prize decks tend to be more inconsistent, as you find yourself on a mission to have to build another attacking Pokémon every turn to replace the attacker who was Knocked Out.