Hello everyone! I hope you all have been enjoying our new Fusion Strike set — I certainly have been! While this set hasn’t been the strongest compared to recent ones, it nonetheless does have a few good decks in it, including Mew VMAX, Gengar VMAX, and the deck I’ll be talking about today; Inteleon VMAX.

Inteleon VMAX is a bit of a different Rapid Strike deck than the Rapid Strike Urshifu VMAX or Sylveon VMAX decks, but it does fit in well with the idea of slowly building toward your KOs, as opposed to aiming for OHKOs. With this deck, you’ll be spreading around damage like crazy between Double Gunner and Inteleon’s Quick Shooting, which can add up pretty quickly. Add in some efficient damage from G-Max Spiral, and the damage can become tough to deal with for any opposing deck. To push Inteleon VMAX over the edge, it is also seemingly purpose-built to use Cheryl, which all but guarantees that it will win a battle of 2HKOs. Against the right matchups, Inteleon VMAX can be a tough deck to deal with, and its matchup spread is good enough that it’s an archetype that should stick around. It’s definitely a deck worth familiarizing yourself with, whether you play with it or against it!

How this deck works is that it wins by slowly grinding the opponent down with a combination of G-Max Spiral and Ability damage, while preventing the opponent from getting Knock Outs with Cheryl. Since G-Max Spiral can be used for a single Rapid Strike Energy, and it returns that Energy to your hand every turn, you can use Cheryl with practically no downside. As such, so long as you are able to use Cheryl, you can prevent your opponent from taking any KOs, which gives you plenty of time to set up Knock Outs of your own.

At 140 damage, G-Max Spiral isn’t the most damaging attack, but when you add in extra damage from Double Gunner and Quick Shooting, it becomes more than adequate. Typically, Inteleon VMAX can 2HKO any other VMAX, and can either OHKO or come close enough to OHKOing regular Vs so that it can take a KO every turn. Thanks to Training Court, we can recycle Water Energy so that we can use Double Gunner every turn, even with a rather low Energy count. On a typical turn, you’ll be able to do around 220 damage, which is pretty solid when you can heal as well!

To solve the issue of being able to find Rapid Strike Energy, both initially and if your opponent sends your hand away with Marnie, this deck also plays Octillery, which can find it every turn if needed. Most of the time, Inteleon VMAX is a rather consistent deck, as you have both Drizzile and Octillery to search for what you need, which as it turns out isn’t that much! To further go into that point, let me share my list of Inteleon VMAX, which you can see below:

Our Pokemon here consist of our Inteleon VMAX line, our other Inteleon line, our Octillery line, and a friendly fish called Basculin. Inteleon helps the deck to pack some extra punch, whereas Octillery helps out the deck’s consistency, particularly against the threat of hand disruption. Since you want to return your Rapid Strike Energy to your hand every turn with G-Max Spiral, any time your opponent plays a Marnie, that means that you have to find your Energy again. Without Octillery, we don’t have any way to search out that Energy, which is a big problem when you need to re-attach it every turn. If you can’t find it, that’s a missed turn of attacking, which is never ideal. With Octillery, however, that isn’t nearly as much of a problem! 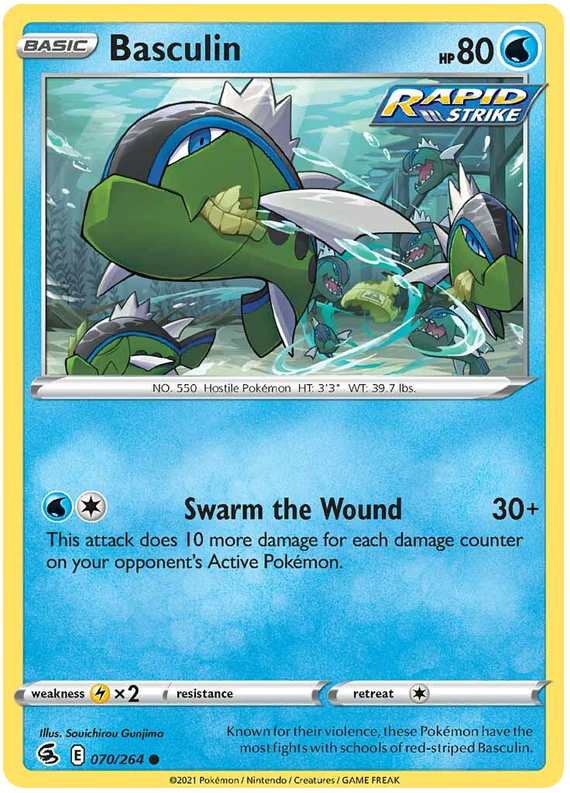 On turns where you don’t have to find your Rapid Strike Energy, Octillery is still a great card to have in play, as it can search out almost all of your Pokemon (the big exception being Drizzile), as well as Korrina's Focus if you need a Supporter, or Tower of Waters if you need a way to retreat or a counter-Stadium. It’s really nice to be able to have that extra Pokemon search, especially as you try to build up your board toward multiple Inteleon. Likewise, if you play against Inteleon VMAX, it is a solid strategy to KO their Octillery, then try to buy some free turns with Marnie.

The one copy of Basculin is a fun tech against opposing VMAX decks, which turns out to be pretty important in some matchups. What Basculin does is that it gives you an easier way to 2HKO VMAXs. After using G-Max Spiral, you only need to hit the damaged VMAX with one use of Double Gunner or Quick Shooting to bring it into Basculin’s KO range. Against VMAXs with higher HP, such as Eternatus VMAX or Rapid Strike Urshifu VMAX, that can often be the difference between getting a 2HKO and missing it. Basculin can also help you get a KO if you’re in an awkward situation where you can’t get enough Inteleon into play, which can help you get past slower starts.

As for the Inteleon VMAX, we play the standard 4-3 line and 4-4-3-1 Inteleon split. I have seen some lists go lighter on one of these Pokemon (typically they play one less Quick Shooting Inteleon), but I’ve never been thrilled about cutting down due to the lower consistency. Two Quick Shooting Inteleon is an amount you can get by with, but it can quickly become awkward if you prize one of them. Likewise, you can cut down on the Inteleon VMAX line in theory, as you’ll almost never use more than two. In this case, Prizes aren’t as much of an issue, so much as that playing the heavier line helps you to get the VMAX into play consistently on turn two. For that reason, I prefer the higher counts.