Hello to all PokeBeach readers! Here’s Gabriel Semedo again with another Pokémon TCG article, and this time, I’m going to talk about the new Inteleon-based deck I’m playing: Vaporeon VMAX!

I’ve been playing Suicune V / Ludicolo since the launch of Evolving Skies (actually, I’ve been playing with proxies even before), and it’s probably the deck I would use if I were playing at an International Championship or Worlds. After so many games with it, though, I decided to take a break from Inteleon-based decks entirely, and I went to play decks like the Shadow Rider Calyrex VMAX build you can find in my last article. But recently, I changed my mind again and went back to playing with Inteleon. Among all the experimental builds I’ve made in recent weeks, there was one that caught my attention — Vaporeon VMAX. I started to explore this deck, building a list based on a few other lists with notable results in recent online tournaments. Soon, however, my deck list began to take on its own shape — the shape I believe is the right way to play Vaporeon VMAX in the current format. In my opinion, the final result is very interesting, bringing both power and consistency thanks to the synergy between Rapid Strike cards. 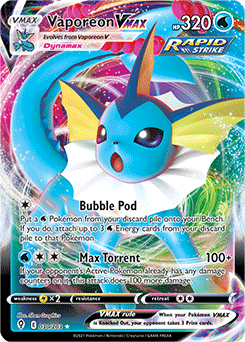 The Vaporeon VMAX list I’m going to analyze today can meet some of the format’s most pressing challenges, such as the best way to use Cheryl, or the best tech to deal with Jolteon VMAX in a non–Urshifu-focused deck. In particular, I want to talk a little bit about Vaporeon VMAX’s first attack, which allows you to search out any Water Pokémon from the discard pile and put it onto your Bench with up to three Water Energy attached to it. It’s an interesting effect at first glance, but are there really any good enough options to make it worthwhile? Let’s find out below!

Evolving Skies was released on August 27, just over a month from the writing of this article. With so many interesting Pokémon to explore, at first I paid hardly any attention to Vaporeon VMAX, but recently I’ve found much more cause to appreciate this versatile Pokémon.

If I had to sum up its strengths in just one sentence, I’d tell you to look no further than its ability to do 200 damage on the second turn for just one Energy attachment. It sounds simple, but the effort required to pull it off is enormous. Vaporeon VMAX is a Pokémon that gains strength proportional to the amount of space you devote in your deck to it. It can be a decent Pokémon in a Sylveon VMAX deck, or it can be an awesome Pokémon in its own deck with Inteleon and Octillery. My goal here is to build a deck so suited for it, it allows Vaporeon VMAX to achieve its full potential.

One of the main disadvantages of Suicune V / Ludicolo is the matchup against Jolteon VMAX. It’s so bad that with all the cards it would take to try and swing it, it’s better to just accept that it’s an auto-loss. In the case of Vaporeon VMAX, the story is different. This Rapid Strike–focused build lends itself perfectly to the perfect counter: Rapid Strike Urshifu VMAX.

With just one of these Urshifu, you can easily beat Jolteon VMAX. Once you set it up, the opponent will probably understand that their chances of winning are low, but then that means your challenge is to set up the Pokémon in the first place. It takes a little luck not to prize either of the two pieces, and the deck also needs to deliver the necessary consistency to achieve the Evolution.

Galarian Zigzagoon is a mandatory part of any Vaporeon VMAX deck, because without a damage counter on the opponent’s Active Pokémon, it’s not possible to swing for the full 200 damage. The big question here is whether to run one copy or two, but I believe that if the objective is to attack with Vaporeon VMAX on the second turn, it’s necessary to run two copies to minimize the likelihood of all of your Zigzagoon being prized.