With every new set, a new set mascot surfaces, and usually, there’s a powerful new archetype to go along with it. In the Tag Team era, it was Reshiram and Charizard-GX for Unbroken Bonds, Mewtwo and Mew-GX for Unified Minds, and so on; and more recently, it’s been Urshifu VMAX and Calyrex VMAX. For Evolving Skies, we got two mascots: the Eeveelutions and Rayquaza VMAX.

As set mascots tend to do, Rayquaza VMAX benefits from a ton of support printed in the set alongside it. There’s a natural Energy acceleration partner in Flaaffy, as well as extra consistency in Stormy Mountains. Not only does Rayquaza VMAX / Flaaffy make for a fun archetype, it’s also a great throwback to Rayquaza decks of old, particularly the great “RayEels” archetype from 2013, which relied on Rayquaza-EX and Eelektrik. 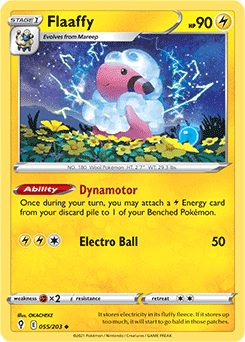 The idea behind the deck is simple: you load a bunch of Lightning Energy onto a Rayquaza, swing for an OHKO by discarding those Lightning Energy, then reattach the discarded Energy via Flaaffy’s Dynamotor and do it all over again. The biggest advantage of this archetype is its damage output; nothing, not even a VMAX, is out of OHKO range, and it’s relatively easy to piece one together against even the toughest Pokemon. Like similar OHKO-oriented decks, this should give Rayquaza VMAX a huge advantage against other VMAX decks, particularly those that can’t OHKO Rayquaza in return. Heading into the Evolving Skies set release, there was an expectation that it would be at least a Tier 2 deck, if not Tier 1. But there’s a problem: Rayquaza players aren’t winning.

It would be one thing if Rayquaza were simply not seeing much play — we could explain that away with its high price tag — but its winning percentage has also been painfully low. It hasn’t put up many significant tournament results, and it’s winning games at a rate lower than any other deck with a meta share over 1%. This certainly isn’t the first time a hyped deck has failed to perform — Magnezone and Reshiram and Zekrom-GX come to mind — but it’s still surprising.

Rayquaza VMAX’s poor results immediately lead us to two questions. First, why is Rayquaza failing when similar decks have had so much success? And, more importantly, is there anything we can do to adjust the deck and make it a more competitive archetype? In this article, I’m going to go over the difficulties Rayquaza has faced in this format that explain why it hasn’t been winning. Following that, I’ll also share the results of my efforts to make Rayquaza into competitive.

To start, I took some existing Rayquaza VMAX lists and played a bunch of games with them to figure out where specifically the deck was having trouble. Even after trying quite a few different lists, I too failed to find any consistent success with the deck. The main issue was the early game, in terms of both consistency and damage output.  If I could get past the early game, Rayquaza flowed extremely well — Azure Pulse gives the deck incredible late-game consistency — but too often, I fell too far behind before I was even able to get to that point. If you fall too far behind, there are some pretty rough matchups. I had trouble keeping up against any deck that wasn’t a VMAX deck, and I was getting beaten badly by anything that could put on pressure with Bench damage. Rayquaza wasn’t consistent enough to truly take advantage of its high damage output, and as a result, it was losing a lot more often than it was winning.

At first glance, most Rayquaza lists seem like they should be consistent. They play a ton of Pokemon search, as well as the typically high number of draw Supporters. On top of that, Rayquaza VMAX itself has built-in draw power in its Ability. But the issue is that while Rayquaza has a lot of search options available to it, it also has immense pressure in the early game to set up. Compared to its predecessor decks like Eelektrik and Malamar, Rayquaza VMAX needs to pull off an extra Evolution — Rayquaza VMAX itself — in order to attack. This has a subtle but effective impact on your early-game consistency, especially when it comes to attacking on turn two. Rather than being able to focus solely on getting Mareep in play on turn one, you also have to make sure you get a Rayquaza in play, otherwise you won’t have much to attack with on the next turn. So not only do you need to find more Pokemon in the early-game, but the detrimental impact of not finding those Pokemon is much worse than it would be otherwise.

Non-VMAX matchups are another problem. Most Rayquaza lists don’t have a reliable attacker other than Rayquaza VMAX, which means that you don’t have many options to limit the number of Prizes you give up. Rayquaza V’s damage caps out at 180, which isn’t enough to OHKO other Pokémon V, and you certainly can’t rely on Flaaffy to attack. Even using lists that played one-of techs like Boltund V or Ninetales V, I still found myself at a pretty big disadvantage. Single-Prize matchups were even worse.

Now, if non-VMAX matchups were the only issue with this deck, it could probably find a path to victory as an anti-meta option, so long as we could fix the consistency issues. However, even some Pokémon VMAX are difficult for Rayquaza to beat, due to its susceptibility to Bench damage. Since we need to keep Flaaffy in play in order to attack, any deck that can KO multiple Flaaffy or Mareep in one turn can easily stop us from doing damage. Rapid Strike Urshifu VMAX, Jolteon VMAX, and Dragapult VMAX are all particularly difficult to beat for that reason.